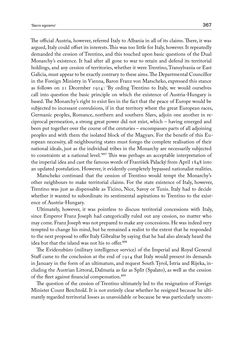 ‘Sacro﻿ egoismo’ 367 The official Austria, however, referred Italy to Albania in all of its claims. There, it was argued, Italy could offset its interests. This was too little for Italy, however. It repeatedly demanded the cession of Trentino, and this touched upon basic questions of the Dual Monarchy’s existence. It had after all gone to war to retain and defend its territorial holdings, and any cession of territories, whether it were Trentino, Transylvania or East Galicia, must appear to be exactly contrary to these aims. The Departmental Councillor in the Foreign Ministry in Vienna, Baron Franz von Matscheko, expressed this stance as follows on 21 December 1914 : ‘By ceding Trentino to Italy, we would ourselves call into question the basic principle on which the existence of Austria-Hungary is based. The Monarchy’s right to exist lies in the fact that the peace of Europe would be subjected to incessant convulsions, if in that territory where the great European races, Germanic peoples, Romance, northern and southern Slavs, adjoin one another in re- ciprocal permeation, a strong great power did not exist, which  – having emerged and been put together over the course of the centuries  – encompasses parts of all adjoining peoples and with them the isolated block of the Magyars. For the benefit of this Eu- ropean necessity, all neighbouring states must forego the complete realisation of their national ideals, just as the individual tribes in the Monarchy are necessarily subjected to constraints at a national level.’857 This was perhaps an acceptable interpretation of the imperial idea and cast the famous words of František Palacký from April 1848 into an updated postulation. However, it evidently completely bypassed nationalist realities. Matscheko continued that the cession of Trentino would tempt the Monarchy’s other neighbours to make territorial claims. For the state existence of Italy, however, Trentino was just as dispensable as Ticino, Nice, Savoy or Tunis. Italy had to decide whether it wanted to subordinate its sentimental aspirations to Trentino to the exist- ence of Austria-Hungary. Ultimately, however, it was pointless to discuss territorial concessions with Italy, since Emperor Franz Joseph had categorically ruled out any cession, no matter who may come. Franz Joseph was not prepared to make any concessions. He was indeed very tempted to change his mind, but he remained a realist to the extent that he responded to the next proposal to offer Italy Gibraltar by saying that he had also already heard the idea but that the island was not his to offer.858 The Evidenzbüro (military intelligence service) of the Imperial and Royal General Staff came to the conclusion at the end of 1914 that Italy would present its demands in January in the form of an ultimatum, and request South Tyrol, Istria and Rijeka, in- cluding the Austrian Littoral, Dalmatia as far as Split (Spalato), as well as the cession of the fleet against financial compensation.859 The question of the cession of Trentino ultimately led to the resignation of Foreign Minister Count Berchtold. It is not entirely clear whether he resigned because he ulti- mately regarded territorial losses as unavoidable or because he was particularly uncom-
back to the  book THE FIRST WORLD WAR - and the End of the Habsburg Monarchy, 1914 – 1918"
THE FIRST WORLD WAR and the End of the Habsburg Monarchy, 1914 – 1918
Entnommen aus der FWF-E-Book-Library