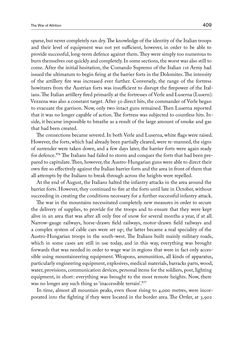 The﻿ War﻿ of﻿ Attrition 409 sparse, but never completely ran dry. The knowledge of the identity of the Italian troops and their level of equipment was not yet sufficient, however, in order to be able to provide successful, long-term defence against them. They were simply too numerous to burn themselves out quickly and completely. In some sections, the worst was also still to come. After the initial hesitation, the Comando Supremo of the Italian 1st Army had issued the ultimatum to begin firing at the barrier forts in the Dolomites. The intensity of the artillery fire was increased ever further. Conversely, the range of the fortress howitzers from the Austrian forts was insufficient to disrupt the firepower of the Ital- ians. The Italian artillery fired primarily at the fortresses of Verle and Luserna (Lusern). Vezzena was also a constant target. After 50 direct hits, the commander of Verle began to evacuate the garrison. Now, only two intact guns remained. Then Luserna reported that it was no longer capable of action. The fortress was subjected to countless hits. In- side, it became impossible to breathe as a result of the large amount of smoke and gas that had been created. The connections became severed. In both Verle and Luserna, white flags were raised. However, the forts, which had already been partially cleared, were re-manned, the signs of surrender were taken down, and a few days later, the barrier forts were again ready for defence.976 The Italians had failed to storm and conquer the forts that had been pre- pared to capitulate. Then, however, the Austro-Hungarian guns were able to direct their own fire so effectively against the Italian barrier forts and the area in front of them that all attempts by the Italians to break through across the heights were repelled. At the end of August, the Italians halted the infantry attacks in the area around the barrier forts. However, they continued to fire at the forts until late in October, without succeeding in creating the conditions necessary for a further successful infantry attack. The war in the mountains necessitated completely new measures in order to secure the delivery of supplies, to provide for the troops and to ensure that they were kept alive in an area that was after all only free of snow for several months a year, if at all. Narrow-gauge railways, horse-drawn field railways, motor-drawn field railways and a complex system of cable cars were set up ; the latter became a real speciality of the Austro-Hungarian troops in the south-west. The Italians built mainly military roads, which in some cases are still in use today, and in this way, everything was brought forwards that was needed in order to wage war in regions that were in fact only acces- sible using mountaineering equipment. Weapons, ammunition, all kinds of apparatus, particularly engineering equipment, explosives, medical materials, barracks parts, wood, water, provisions, communication devices, personal items for the soldiers, post, lighting equipment, in short : everything was brought to the most remote heights. Now, there was no longer any such thing as ‘inaccessible terrain’.977 In time, almost all mountain peaks, even those rising to 4,000 metres, were incor- porated into the fighting if they were located in the border area. The Ortler, at 3,902
back to the  book THE FIRST WORLD WAR - and the End of the Habsburg Monarchy, 1914 – 1918"
THE FIRST WORLD WAR and the End of the Habsburg Monarchy, 1914 – 1918
Entnommen aus der FWF-E-Book-Library