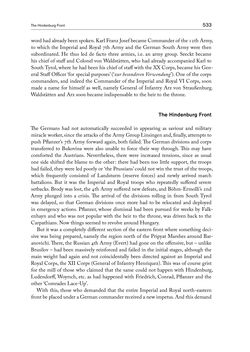 The﻿ Hindenburg﻿ Front 533 word had already been spoken. Karl Franz Josef became Commander of the 12th Army, to which the Imperial and Royal 7th Army and the German South Army were then subordinated. He thus led de facto three armies, i.e. an army group. Seeckt became his chief of staff and Colonel von Waldstätten, who had already accompanied Karl to South Tyrol, where he had been his chief of staff with the XX Corps, became his Gen- eral Staff Officer ‘for special purposes’ (‘zur besonderen Verwendung’). One of the corps commanders, and indeed the Commander of the Imperial and Royal VI Corps, soon made a name for himself as well, namely General of Infantry Arz von Straußenburg. Waldstätten and Arz soon became indispensable to the heir to the throne. The Hindenburg Front The Germans had not automatically succeeded in appearing as saviour and military miracle worker, since the attacks of the Army Group Linsingen and, finally, attempts to push Pflanzer’s 7th Army forward again, both failed. The German divisions and corps transferred to Bukovina were also unable to force their way through. This may have comforted the Austrians. Nevertheless, there were increased tensions, since as usual one side shifted the blame to the other : there had been too little support, the troops had failed, they were led poorly or ‘the Prussians’ could not win the trust of the troops, which frequently consisted of Landsturm (reserve forces) and newly arrived march battalions. But it was the Imperial and Royal troops who repeatedly suffered severe setbacks. Brody was lost, the 4th Army suffered new defeats, and Böhm-Ermolli’s 2nd Army plunged into a crisis. The arrival of the divisions rolling in from South Tyrol was delayed, so that German divisions once more had to be relocated and deployed in emergency actions. Pflanzer, whose dismissal had been pursued for weeks by Falk- enhayn and who was not popular with the heir to the throne, was driven back to the Carpathians. Now things seemed to revolve around Hungary. But it was a completely different section of the eastern front where something deci- sive was being prepared, namely the region north of the Pripyat Marshes around Bar- anovichi. There, the Russian 4th Army (Evert) had gone on the offensive, but  – unlike Brusilov  – had been massively reinforced and failed in the initial stages, although the main weight had again and not coincidentally been directed against an Imperial and Royal Corps, the XII Corps (General of Infantry Henriquez). This was of course grist for the mill of those who claimed that the same could not happen with Hindenburg, Ludendorff, Woyrsch, etc. as had happened with Friedrich, Conrad, Pflanzer and the other ‘Comrades Lace-Up’. With this, those who demanded that the entire Imperial and Royal north-eastern front be placed under a German commander received a new impetus. And this demand
back to the  book THE FIRST WORLD WAR - and the End of the Habsburg Monarchy, 1914 – 1918"
THE FIRST WORLD WAR and the End of the Habsburg Monarchy, 1914 – 1918
Entnommen aus der FWF-E-Book-Library