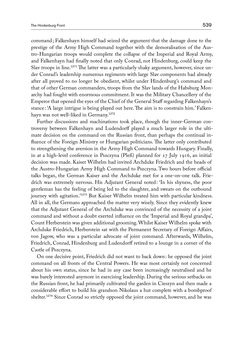 The﻿ Hindenburg﻿ Front 539 command ; Falkenhayn himself had seized the argument that the damage done to the prestige of the Army High Command together with the demoralisation of the Aus- tro-Hungarian troops would complete the collapse of the Imperial and Royal Army, and Falkenhayn had finally noted that only Conrad, not Hindenburg, could keep the Slav troops in line.1271 The latter was a particularly shaky argument, however, since un- der Conrad’s leadership numerous regiments with large Slav components had already after all proved to no longer be obedient, whilst under Hindenburg’s command and that of other German commanders, troops from the Slav lands of the Habsburg Mon- archy had fought with enormous commitment. It was the Military Chancellery of the Emperor that opened the eyes of the Chief of the General Staff regarding Falkenhayn’s stance : ‘A large intrigue is being played out here. The aim is to constrain him.’ Falken- hayn was not well-liked in Germany.1272 Further discussions and machinations took place, though the inner-German con- troversy between Falkenhayn and Ludendorff played a much larger role in the ulti- mate decision on the command on the Russian front, than perhaps the continual in- fluence of the Foreign Ministry or Hungarian politicians. The latter only contributed to strengthening the aversion in the Army High Command towards Hungary. Finally, in at a high-level conference in Pszczyna (Pleß) planned for 27 July 1916, an initial decision was made. Kaiser Wilhelm had invited Archduke Friedrich and the heads of the Austro-Hungarian Army High Command to Pszczyna. Two hours before official talks began, the German Kaiser and the Archduke met for a one-on-one talk. Frie- drich was extremely nervous. His Adjutant General noted : ‘In his shyness, the poor gentleman has the feeling of being led to the slaughter, and sweats on the outbound journey with agitation.’1273 But Kaiser Wilhelm treated him with particular kindness. All in all, the Germans approached the matter very wisely. Since they evidently knew that the Adjutant General of the Archduke was convinced of the necessity of a joint command and without a doubt exerted influence on the ‘Imperial and Royal grandpa’, Count Herberstein was given additional grooming. Whilst Kaiser Wilhelm spoke with Archduke Friedrich, Herberstein sat with the Permanent Secretary of Foreign Affairs, von Jagow, who was a particular advocate of joint command. Afterwards, Wilhelm, Friedrich, Conrad, Hindenburg and Ludendorff retired to a lounge in a corner of the Castle of Pszczyna. On one decisive point, Friedrich did not want to back down : he opposed the joint command on all fronts of the Central Powers. He was most certainly not concerned about his own status, since he had in any case been increasingly neutralised and he was barely interested anymore in exercising leadership. During the serious setbacks on the Russian front, he had primarily cultivated the garden in Cieszyn and then made a considerable effort to build his grandson Nikolaus a hut complete with a bombproof shelter.1274 Since Conrad so strictly opposed the joint command, however, and he was
back to the  book THE FIRST WORLD WAR - and the End of the Habsburg Monarchy, 1914 – 1918"
THE FIRST WORLD WAR and the End of the Habsburg Monarchy, 1914 – 1918
Entnommen aus der FWF-E-Book-Library