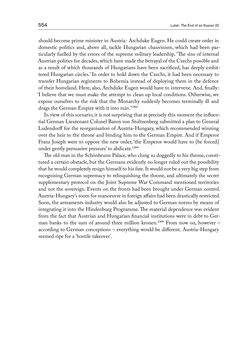 554 Lutsk : The End of an Illusion (II) should become prime minister in Austria : Archduke Eugen. He could create order in domestic politics and, above all, tackle Hungarian chauvinism, which had been par- ticularly fuelled by the errors of the supreme military leadership. ‘The sins of internal Austrian politics for decades, which have made the betrayal of the Czechs possible and as a result of which thousands of Hungarians have been sacrificed, has deeply embit- tered Hungarian circles.’ In order to hold down the Czechs, it had been necessary to transfer Hungarian regiments to Bohemia instead of deploying them in the defence of their homeland. Here, also, Archduke Eugen would have to intervene. And, finally : ‘I believe that we must make the attempt to clean up local conditions. Otherwise, we expose ourselves to the risk that the Monarchy suddenly becomes terminally ill and drags the German Empire with it into ruin.’1303 In view of this scenario, it is not surprising that at precisely this moment the influen- tial German Lieutenant Colonel Baron von Stoltzenberg submitted a plan to General Ludendorff for the reorganisation of Austria-Hungary, which recommended winning over the heir to the throne and binding him to the German Empire. And if Emperor Franz Joseph were to oppose the new order, ‘the Emperor would have to [be forced] under gently persuasive pressure’ to abdicate.1304 The old man in the Schönbrunn Palace, who clung so doggedly to his throne, consti- tuted a certain obstacle, but the Germans evidently no longer ruled out the possibility that he would completely resign himself to his fate. It would not be a very big step from recognising German supremacy to relinquishing the throne, and ultimately the secret supplementary protocol on the Joint Supreme War Command mentioned territories and not the sovereign. Events on the fronts had been brought under German control. Austria-Hungary’s room for manoeuvre in foreign affairs had been drastically restricted. Soon, the armaments industry would also be adjusted to German norms by means of integrating it into the Hindenburg Programme. The material dependence was evident from the fact that Austrian and Hungarian financial institutions were in debt to Ger- man banks to the sum of around three million kronen.1305 From now on, however  – according to German conceptions  – everything would be different. Austria-Hungary seemed ripe for a ‘hostile takeover’.
back to the  book THE FIRST WORLD WAR - and the End of the Habsburg Monarchy, 1914 – 1918"
THE FIRST WORLD WAR and the End of the Habsburg Monarchy, 1914 – 1918
Entnommen aus der FWF-E-Book-Library