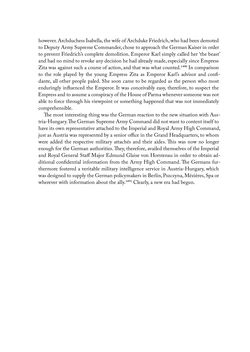 however. Archduchess Isabella, the wife of Archduke Friedrich, who had been demoted to Deputy Army Supreme Commander, chose to approach the German Kaiser in order to prevent Friedrich’s complete demolition. Emperor Karl simply called her ‘the beast’ and had no mind to revoke any decision he had already made, especially since Empress Zita was against such a course of action, and that was what counted.1490 In comparison to the role played by the young Empress Zita as Emperor Karl’s advisor and confi- dante, all other people paled. She soon came to be regarded as the person who most enduringly influenced the Emperor. It was conceivably easy, therefore, to suspect the Empress and to assume a conspiracy of the House of Parma whenever someone was not able to force through his viewpoint or something happened that was not immediately comprehensible. The most interesting thing was the German reaction to the new situation with Aus- tria-Hungary. The German Supreme Army Command did not want to content itself to have its own representative attached to the Imperial and Royal Army High Command, just as Austria was represented by a senior office in the Grand Headquarters, to whom were added the respective military attachés and their aides. This was now no longer enough for the German authorities. They, therefore, availed themselves of the Imperial and Royal General Staff Major Edmund Glaise von Horstenau in order to obtain ad- ditional confidential information from the Army High Command. The Germans fur- thermore fostered a veritable military intelligence service in Austria-Hungary, which was designed to supply the German policymakers in Berlin, Pszczyna, Mézières, Spa or wherever with information about the ally.1491 Clearly, a new era had begun.
back to the  book THE FIRST WORLD WAR - and the End of the Habsburg Monarchy, 1914 – 1918"
THE FIRST WORLD WAR and the End of the Habsburg Monarchy, 1914 – 1918
Entnommen aus der FWF-E-Book-Library