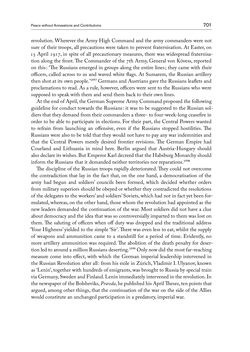 Peace﻿ without﻿ Annexations﻿ and﻿ Contributions 701 revolution. Wherever the Army High Command and the army commanders were not sure of their troops, all precautions were taken to prevent fraternisation. At Easter, on 15 April 1917, in spite of all precautionary measures, there was widespread fraternisa- tion along the front. The Commander of the 7th Army, General von Kövess, reported on this : ‘The Russians emerged in groups along the entire lines ; they came with their officers, called across to us and waved white flags. At Sumarem, the Russian artillery then shot at its own people.’1597 Germans and Austrians gave the Russians leaflets and proclamations to read. As a rule, however, officers were sent to the Russians who were supposed to speak with them and send them back to their own lines. At the end of April, the German Supreme Army Command proposed the following guideline for conduct towards the Russians : it was to be suggested to the Russian sol- diers that they demand from their commanders a three- to four-week-long ceasefire in order to be able to participate in elections. For their part, the Central Powers wanted to refrain from launching an offensive, even if the Russians stopped hostilities. The Russians were also to be told that they would not have to pay any war indemnities and that the Central Powers merely desired frontier revisions. The German Empire had Courland and Lithuania in mind here. Berlin argued that Austria-Hungary should also declare its wishes. But Emperor Karl decreed that the Habsburg Monarchy should inform the Russians that it demanded neither territories nor reparations.1598 The discipline of the Russian troops rapidly deteriorated. They could not overcome the contradiction that lay in the fact that, on the one hand, a democratisation of the army had begun and soldiers’ councils been formed, which decided whether orders from military superiors should be obeyed or whether they contradicted the resolutions of the delegates to the workers’ and soldiers’ Soviets, which had not in fact yet been for- mulated, whereas, on the other hand, those whom the revolution had appointed as the new leaders demanded the continuation of the war. Most soldiers did not have a clue about democracy and the idea that was so controversially imparted to them was lost on them. The saluting of officers when off duty was dropped and the traditional address ‘Your Highness’ yielded to the simple ‘Sir’. There was even less to eat, whilst the supply of weapons and ammunition came to a standstill for a period of time. Evidently, no more artillery ammunition was required. The abolition of the death penalty for deser- tion led to around a million Russians deserting.1599 Only now did the most far-reaching measure come into effect, with which the German imperial leadership intervened in the Russian Revolution after all : from his exile in Zürich, Vladimir I. Ulyanov, known as ‘Lenin’, together with hundreds of emigrants, was brought to Russia by special train via Germany, Sweden and Finland. Lenin immediately intervened in the revolution. In the newspaper of the Bolsheviks, Pravda, he published his April Theses, ten points that argued, among other things, that the continuation of the war on the side of the Allies would constitute an unchanged participation in a predatory, imperial war.
back to the  book THE FIRST WORLD WAR - and the End of the Habsburg Monarchy, 1914 – 1918"
THE FIRST WORLD WAR and the End of the Habsburg Monarchy, 1914 – 1918
Entnommen aus der FWF-E-Book-Library