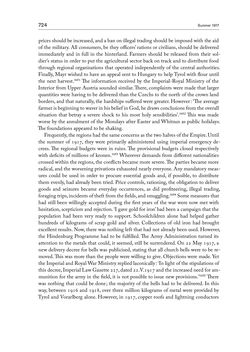 724 Summer 1917 prices should be increased, and a ban on illegal trading should be imposed with the aid of the military. All consumers, be they officers’ rations or civilians, should be delivered immediately and in full in the hinterland. Farmers should be released from their sol- dier’s status in order to put the agricultural sector back on track and to distribute food through regional organisations that operated independently of the central authorities. Finally, Mayr wished to have an appeal sent to Hungary to help Tyrol with flour until the next harvest.1651 The information received by the Imperial-Royal Ministry of the Interior from Upper Austria sounded similar. There, complaints were made that larger quantities were having to be delivered than the Czechs to the north of the crown land borders, and that naturally, the hardships suffered were greater. However : ‘The average farmer is beginning to waver in his belief in God, he draws conclusions from the overall situation that betray a severe shock to his most holy sensibilities’.1652 This was made worse by the annulment of the Mondays after Easter and Whitsun as public holidays. The foundations appeared to be shaking. Frequently, the regions had the same concerns as the two halves of the Empire. Until the summer of 1917, they were primarily administered using imperial emergency de- crees. The regional budgets were in ruins. The provisional budgets closed respectively with deficits of millions of kronen.1653 Wherever demands from different nationalities crossed within the regions, the conflicts became more severe. The parties became more radical, and the worsening privations exhausted nearly everyone. Any mandatory meas- ures could be used in order to procure essential goods and, if possible, to distribute them evenly, had already been tried. Price controls, rationing, the obligation to deliver goods and seizures became everyday occurrences, as did profiteering, illegal trading, foraging trips, incidents of theft from the fields, and smuggling.1654 Some measures that had still been willingly accepted during the first years of the war were now met with hesitation, scepticism and rejection. ‘I gave gold for iron’ had been a campaign that the population had been very ready to support. Schoolchildren alone had helped gather hundreds of kilograms of scrap gold and silver. Collections of old iron had brought excellent results. Now, there was nothing left that had not already been used. However, the Hindenburg Programme had to be fulfilled. The Army Administration turned its attention to the metals that could, it seemed, still be surrendered. On 22 May 1917, a new delivery decree for bells was publicised, stating that all church bells were to be re- moved. This was more than the people were willing to give. Objections were made. Yet the Imperial and Royal War Ministry replied laconically : ‘In light of the stipulations of this decree, Imperial Law Gazette 227, dated 22.V.1917 and the increased need for am- munition for the army in the field, it is not possible to issue new provisions.’1655 There was nothing that could be done ; the majority of the bells had to be delivered. In this way, between 1916 and 1918, over three million kilograms of metal were provided by Tyrol and Vorarlberg alone. However, in 1917, copper roofs and lightning conductors
back to the  book THE FIRST WORLD WAR - and the End of the Habsburg Monarchy, 1914 – 1918"
THE FIRST WORLD WAR and the End of the Habsburg Monarchy, 1914 – 1918
Entnommen aus der FWF-E-Book-Library