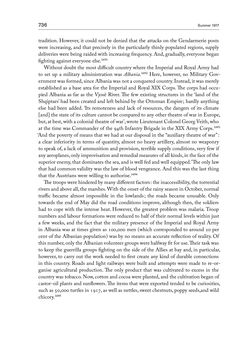 736 Summer 1917 tradition. However, it could not be denied that the attacks on the Gendarmerie posts were increasing, and that precisely in the particularly thinly populated regions, supply deliveries were being raided with increasing frequency. And, gradually, everyone began fighting against everyone else.1691 Without doubt the most difficult country where the Imperial and Royal Army had to set up a military administration was Albania.1692 Here, however, no Military Gov- ernment was formed, since Albania was not a conquered country. Instead, it was merely established as a base area for the Imperial and Royal XIX Corps. The corps had occu- pied Albania as far as the Vjosë River. The few existing structures in the ‘land of the Shqiptars’ had been created and left behind by the Ottoman Empire ; hardly anything else had been added. ‘Its remoteness and lack of resources, the dangers of its climate [and] the state of its culture cannot be compared to any other theatre of war in Europe, but, at best, with a colonial theatre of war’, wrote Lieutenant Colonel Georg Veith, who at the time was Commander of the 94th Infantry Brigade in the XIX Army Corps.1693 ‘And the poverty of means that we had at our disposal in the “auxiliary theatre of war” : a clear inferiority in terms of quantity, almost no heavy artillery, almost no weaponry to speak of, a lack of ammunition and provision, terrible supply conditions, very few if any aeroplanes, only improvisation and remedial measures of all kinds, in the face of the superior enemy, that dominates the sea, and is well fed and well equipped.’ The only law that had common validity was the law of blood vengeance. And this was the last thing that the Austrians were willing to authorise.1694 The troops were hindered by many different factors : the inaccessibility, the torrential rivers and above all, the marshes. With the onset of the rainy season in October, normal traffic became almost impossible in the lowlands ; the roads became unusable. Only towards the end of May did the road conditions improve, although then, the soldiers had to cope with the intense heat. However, the greatest problem was malaria. Troop numbers and labour formations were reduced to half of their normal levels within just a few weeks, and the fact that the military presence of the Imperial and Royal Army in Albania was at times given as 100,000 men (which corresponded to around 20 per cent of the Albanian population) was by no means an accurate reflection of reality. Of this number, only the Albanian volunteer groups were halfway fit for use. Their task was to keep the guerrilla groups fighting on the side of the Allies at bay and, in particular, however, to carry out the work needed to first create any kind of durable connections in this country. Roads and light railways were built and attempts were made to re-or- ganise agricultural production. The only product that was cultivated to excess in the country was tobacco. Now, cotton and cocoa were planted, and the cultivation began of castor-oil plants and sunflowers. The items that were exported tended to be curiosities, such as 50,000 turtles in 1917, as well as nettles, sweet chestnuts, poppy seeds,and wild chicory.1695
back to the  book THE FIRST WORLD WAR - and the End of the Habsburg Monarchy, 1914 – 1918"
THE FIRST WORLD WAR and the End of the Habsburg Monarchy, 1914 – 1918
Entnommen aus der FWF-E-Book-Library