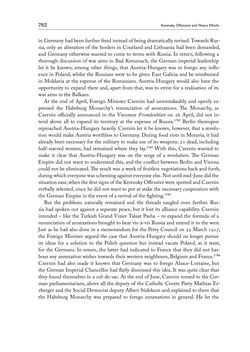 762 Kerensky Offensive and Peace Efforts in Germany had been further fixed instead of being dramatically revised. Towards Rus- sia, only an alteration of the borders in Courland and Lithuania had been demanded, and Germany otherwise wanted to come to terms with Russia. In return, following a thorough discussion of war aims in Bad Kreuznach, the German imperial leadership let it be known, among other things, that Austria-Hungary was to forego any influ- ence in Poland, whilst the Russians were to be given East Galicia and be reimbursed in Moldavia at the expense of the Romanians. Austria-Hungary would also have the opportunity to expand there and, apart from that, was to strive for a realisation of its war aims in the Balkans. At the end of April, Foreign Minister Czernin had unmistakeably and openly ex- pressed the Habsburg Monarchy’s renunciation of annexations. The Monarchy, as Czernin officially announced in the Viennese Fremdenblatt on 26 April, did not in- tend above all to expand its territory at the expense of Russia.1783 Berlin thereupon reproached Austria-Hungary heavily. Czernin let it be known, however, that a revolu- tion would make Austria worthless to Germany. During food riots in Moravia, it had already been necessary for the military to make use of its weapons. 21 dead, including half-starved women, had remained where they lay.1784 With this, Czernin wanted to make it clear that Austria-Hungary was on the verge of a revolution. The German Empire did not want to understand this, and the conflict between Berlin and Vienna could not be eliminated. The result was a week of fruitless negotiations back and forth, during which everyone was scheming against everyone else. Not until mid-June did the situation ease, when the first signs of the Kerensky Offensive were spotted and Czernin verbally relented, since he did not want to put at stake the necessary cooperation with the German Empire in the event of a revival of the fighting.1785 But the problems naturally remained and the threads tangled even further. Rus- sia had spoken out against a separate peace, but it lost its alliance capability. Czernin intended  – like the Turkish Grand Vizier Talaat Pasha  – to expand the formula of a renunciation of annexations brought to bear vis-à-vis Russia and extend it to the west. Just as he had also done in a memorandum for the Privy Council on 22 March 1917, the Foreign Minister argued the case that Austria-Hungary should no longer pursue its ideas for a solution to the Polish question but instead vacate Poland, as it were, for the Germans. In return, the latter had indicated to France that they did not har- bour any annexation wishes towards their western neighbours, Belgium and France.1786 Czernin had also made it known that Germany was to forego Alsace-Lorraine, but the German Imperial Chancellor had flatly dismissed this idea. It was quite clear that they found themselves in a cul-de-sac. At the end of June, Czernin turned to the Ger- man parliamentarians, above all the deputy of the Catholic Centre Party Mathias Er- zberger and the Social Democrat deputy Albert Südekum and explained to them that the Habsburg Monarchy was prepared to forego annexations in general. He let the
back to the  book THE FIRST WORLD WAR - and the End of the Habsburg Monarchy, 1914 – 1918"
THE FIRST WORLD WAR and the End of the Habsburg Monarchy, 1914 – 1918
Entnommen aus der FWF-E-Book-Library