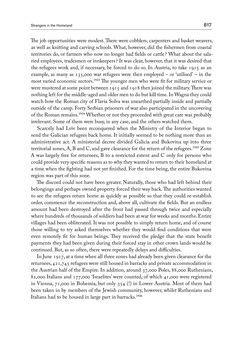 Strangers﻿ in﻿ the﻿ Homeland 817 The job opportunities were modest. There were cobblers, carpenters and basket weavers, as well as knitting and carving schools. What, however, did the fishermen from coastal territories do, or farmers who now no longer had fields or cattle ? What about the sala- ried employees, tradesmen or innkeepers ? It was clear, however, that it was desired that the refugees work and, if necessary, be forced to do so. In Austria, to take 1915 as an example, as many as 135,000 war refugees were then employed  – or ‘utilised’  – in the most varied economic sectors.1923 The younger men who were fit for military service or were mustered at some point between 1915 and 1918 then joined the military. There was nothing left for the middle-aged and older men to do but kill time. In Wagna they could watch how the Roman city of Flavia Solva was unearthed partially inside and partially outside of the camp. Forty Serbian prisoners of war also participated in the uncovering of the Roman remains.1924 Whether or not they proceeded with great care was probably irrelevant. Some of them were busy, in any case, and the others watched them. Scarcely had Lviv been reconquered when the Ministry of the Interior began to send the Galician refugees back home. It initially seemed to be nothing more than an administrative act. A ministerial decree divided Galicia and Bukovina up into three territorial zones, A, B and C, and gave clearance for the return of the refugees.1925 Zone A was largely free for returnees, B to a restricted extent and C only for persons who could provide very specific reasons as to why they wanted to return to their homeland at a time when the fighting had not yet finished. For the time being, the entire Bukovina region was part of this zone. The discord could not have been greater. Naturally, those who had left behind their belongings and perhaps owned property forced their way back. The authorities wanted to see the refugees return home as quickly as possible so that they could re-establish order, commence the reconstruction and, above all, cultivate the fields. But an endless amount had been destroyed after the front had passed through twice and especially where hundreds of thousands of soldiers had been at war for weeks and months. Entire villages had been obliterated. It was not possible to simply return home, and of course those willing to try asked themselves whether they would find conditions that were even remotely fit for human beings. They received the pledge that the state benefit payments they had been given during their forced stay in other crown lands would be continued. But, as so often, there were repeatedly delays and difficulties. In June 1917, at a time when all three zones had already been given clearance for the returnees, 421,745 refugees were still housed in barracks and private accommodation in the Austrian half of the Empire. In addition, around 37,000 Poles, 88,000 Ruthenians, 82,000 Italians and 177,000 ‘Israelites’ were counted, of which 41,000 were registered in Vienna, 71,000 in Bohemia, but only 354 (!) in Lower Austria. Most of them had been taken in by members of the Jewish community, however, whilst Ruthenians and Italians had to be housed in large part in barracks.1926
back to the  book THE FIRST WORLD WAR - and the End of the Habsburg Monarchy, 1914 – 1918"
THE FIRST WORLD WAR and the End of the Habsburg Monarchy, 1914 – 1918
Entnommen aus der FWF-E-Book-Library