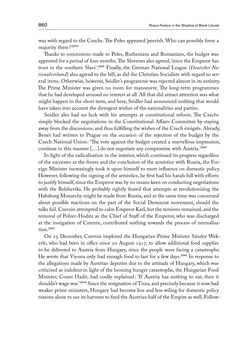 860 Peace Feelers in the Shadow of Brest-Litovsk was with regard to the Czechs. The Poles appeared ‘peevish. Who can possibly form a majority there ?’2039 Thanks to concessions made to Poles, Ruthenians and Romanians, the budget was approved for a period of four months. The Slovenes also agreed, ‘since the Emperor has trust in the southern Slavs’.2040 Finally, the German National League (Deutscher Na- tionalverband) also agreed to the bill, as did the Christian Socialists with regard to sev- eral items. Otherwise, however, Seidler’s programme was rejected almost in its entirety. The Prime Minister was given no room for manoeuvre. The long-term programmes that he had developed aroused no interest at all. All that did attract attention was what might happen in the short term, and here, Seidler had announced nothing that would have taken into account the divergent wishes of the nationalities and parties. Seidler also had no luck with his attempts at constitutional reform. The Czechs simply blocked the negotiations in the Constitutional Affairs Committee by staying away from the discussions, and thus fulfilling the wishes of the Czech émigrés. Already, Beneš had written to Prague on the occasion of the rejection of the budget by the Czech National Union : ‘The vote against the budget created a marvellous impression, continue in this manner […] do not negotiate any compromise with Austria.’2041 In light of the radicalisation in the interior, which continued its progress regardless of the successes at the fronts and the conclusion of the armistice with Russia, the For- eign Minister increasingly took it upon himself to exert influence on domestic policy. However, following the signing of the armistice, he first had his hands full with efforts to justify himself, since the Emperor was by no means keen on conducting negotiations with the Bolsheviks. He probably rightly feared that attempts at revolutionising the Habsburg Monarchy might be made from Russia, and at the same time was concerned about possible reactions on the part of the Social Democrat movement, should the talks fail. Czernin attempted to calm Emperor Karl, but the tensions remained, and the removal of Polzer-Hoditz as the Chief of Staff of the Emperor, who was discharged at the instigation of Czernin, contributed nothing towards the process of normalisa- tion.2042 On 23 December, Czernin implored the Hungarian Prime Minister Sándor Wek- erle, who had been in office since 20 August 1917, to allow additional food supplies to be delivered to Austria from Hungary, since the people were facing a catastrophe. He wrote that Vienna only had enough food to last for a few days.2043 In response to the allegations made by Austrian deputies due to the attitude of Hungary, which was criticised as indolent in light of the looming hunger catastrophe, the Hungarian Food Minister, Count Hadit, had coolly explained : ‘If Austria has nothing to eat, then it shouldn’t wage war.’2044 Since the resignation of Tisza, and precisely because it now had weaker prime ministers, Hungary had become less and less wiling for domestic policy reasons alone to use its harvests to feed the Austrian half of the Empire as well. Follow-
back to the  book THE FIRST WORLD WAR - and the End of the Habsburg Monarchy, 1914 – 1918"
THE FIRST WORLD WAR and the End of the Habsburg Monarchy, 1914 – 1918
Entnommen aus der FWF-E-Book-Library