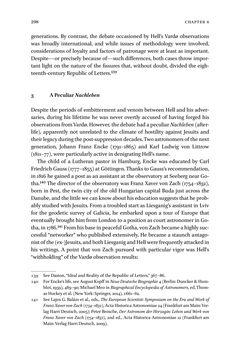 Chapter 6298 generations. By contrast, the debate occasioned by Hell’s Vardø observations was broadly international, and while issues of methodology were involved, considerations of loyalty and factors of patronage were at least as important. Despite—or precisely because of—such differences, both cases throw impor- tant light on the nature of the fissures that, without doubt, divided the eigh- teenth-century Republic of Letters.139 3 A Peculiar Nachleben Despite the periods of embitterment and venom between Hell and his adver- saries, during his lifetime he was never overtly accused of having forged his observations from Vardø. However, the debate had a peculiar Nachleben (after- life), apparently not unrelated to the climate of hostility against Jesuits and their legacy during the post-suppression decades. Two astronomers of the next generation, Johann Franz Encke (1791–1865) and Karl Ludwig von Littrow (1811–77), were particularly active in denigrating Hell’s name. The child of a Lutheran pastor in Hamburg, Encke was educated by Carl Friedrich Gauss (1777–1855) at Göttingen. Thanks to Gauss’s recommendation, in 1816 he gained a post as an assistant at the observatory at Seeberg near Go- tha.140 The director of the observatory was Franz Xaver von Zach (1754–1832), born in Pest, the twin city of the old Hungarian capital Buda just across the Danube, and the little we can know about his education suggests that he prob- ably studied with Jesuits. From a troubled start as Liesganig’s assistant in Lviv for the geodetic survey of Galicia, he embarked upon a tour of Europe that eventually brought him from London to a position as court astronomer in Go- tha, in 1786.141 From his base in peaceful Gotha, von Zach became a highly suc- cessful “networker” who published extensively. He became a staunch antago- nist of the (ex-)Jesuits, and both Liesganig and Hell were frequently attacked in his writings. A point that von Zach pursued with particular vigor was Hell’s “withholding” of the Vardø observation results: 139 See Daston, “Ideal and Reality of the Republic of Letters,” 367–86. 140 For Encke’s life, see August Kopff in Neue Deutsche Biographie 4 (Berlin: Duncker & Hum- blot, 1959), 489–90; Michael Meo in Biographical Encyclopedia of Astronomers, ed. Thom- as Hockey et al. (New York: Springer, 2014), 1:661–62. 141 See Lajos G. Balázs et al., eds., The European Scientist: Symposium on the Era and Work of Franz Xaver von Zach (1754–1832), Acta Historica Astronomiae 24 (Frankfurt am Main: Ver- lag Harri Deutsch, 2005); Peter Brosche, Der Astronom der Herzogin: Leben und Werk von Franz Xaver von Zach (1754–1832), 2nd ed., Acta Historica Astronomiae 12 (Frankfurt am Main: Verlag Harri Deutsch, 2009).
back to the  book Maximilian Hell (1720–92) - And the Ends of Jesuit Science in Enlightenment Europe"
Maximilian Hell (1720–92) And the Ends of Jesuit Science in Enlightenment Europe