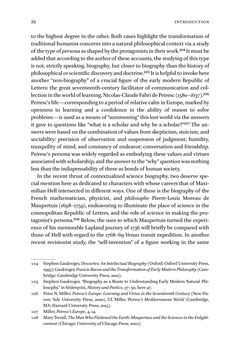 Introduction32 to the highest degree in the other. Both cases highlight the transformation of traditional humanist concerns into a natural philosophical context via a study of the type of persona as shaped by the protagonists in their work.104 It must be added that according to the author of these accounts, the studying of this type is not, strictly speaking, biography, but closer to biography than the history of philosophical or scientific discovery and doctrine.105 It is helpful to invoke here another “non-biography” of a crucial figure of the early modern Republic of Letters: the great seventeenth-century facilitator of communication and col- lection in the world of learning, Nicolas-Claude Fabri de Peiresc (1580–1637).106 Peiresc’s life—corresponding to a period of relative calm in Europe, marked by openness to learning and a confidence in the ability of reason to solve problems—is used as a means of “summoning” this lost world via the answers it gave to questions like “what is a scholar and why be a scholar?”107 The an- swers were based on the combination of values from skepticism, stoicism, and sociability: precision of observation and suspension of judgment; humility, tranquility of mind, and constancy of endeavor; conversation and friendship. Peiresc’s persona was widely regarded as embodying these values and virtues associated with scholarship, and the answer to the “why” question was nothing less than the indispensability of these as bonds of human society. In the recent thrust of contextualized science biography, two deserve spe- cial mention here as dedicated to characters with whose careers that of Maxi- milian Hell intersected in different ways. One of these is the biography of the French mathematician, physicist, and philosophe Pierre-Louis Moreau de Maupertuis (1698–1759), endeavoring to illuminate the place of science in the cosmopolitan Republic of Letters, and the role of science in making the pro- tagonist’s persona.108 Below, the uses to which Maupertuis turned the experi- ence of his memorable Lapland journey of 1736 will briefly be compared with those of Hell with regard to the 1768–69 Venus transit expedition. In another recent revisionist study, the “self-invention” of a figure working in the same 104 Stephen Gaukroger, Descartes: An Intellectual Biography (Oxford: Oxford University Press, 1995); Gaukroger, Francis Bacon and the Transformation of Early Modern Philosophy (Cam- bridge: Cambridge University Press, 2001). 105 Stephen Gaukroger, “Biography as a Route to Understanding Early Modern Natural Phi- losophy,” in Söderqvist, History and Poetics, 37–50, here 47. 106 Peter N. Miller, Peiresc’s Europe: Learning and Virtue in the Seventeenth Century (New Ha- ven: Yale University Press, 2000). Cf. Miller, Peiresc’s Mediterranean World (Cambridge, MA: Harvard University Press, 2015). 107 Miller, Peiresc’s Europe, 4, 14. 108 Mary Terrall, The Man Who Flattened the Earth: Maupertuis and the Sciences in the Enlight- enment (Chicago: University of Chicago Press, 2002).
zurück zum  Buch Maximilian Hell (1720–92) - And the Ends of Jesuit Science in Enlightenment Europe"
Maximilian Hell (1720–92) And the Ends of Jesuit Science in Enlightenment Europe