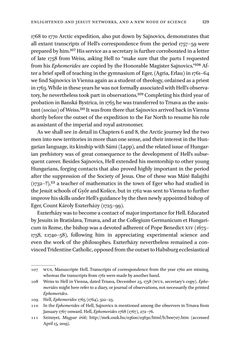 129Enlightened and Jesuit Networks, and a New Node of Science 1768 to 1770 Arctic expedition, also put down by Sajnovics, demonstrates that all extant transcripts of Hell’s correspondence from the period 1757–59 were prepared by him.107 His service as a secretary is further corroborated in a letter of late 1758 from Weiss, asking Hell to “make sure that the parts I requested from his Ephemerides are copied by the Honorable Magister Sajnovics.”108 Af- ter a brief spell of teaching in the gymnasium of Eger, (Agria, Erlau) in 1761–64 we find Sajnovics in Vienna again as a student of theology, ordained as a priest in 1763. While in these years he was not formally associated with Hell’s observa- tory, he nevertheless took part in observations.109 Completing his third year of probation in Banská Bystrica, in 1765 he was transferred to Trnava as the assis- tant (socius) of Weiss.110 It was from there that Sajnovics arrived back in Vienna shortly before the outset of the expedition to the Far North to resume his role as assistant of the imperial and royal astronomer. As we shall see in detail in Chapters 6 and 8, the Arctic journey led the two men into new territories in more than one sense, and their interest in the Hun- garian language, its kinship with Sámi (Lapp), and the related issue of Hungar- ian prehistory was of great consequence to the development of Hell’s subse- quent career. Besides Sajnovics, Hell extended his mentorship to other young Hungarians, forging contacts that also proved highly important in the period after the suppression of the Society of Jesus. One of these was Máté Balajthi (1732–?),111 a teacher of mathematics in the town of Eger who had studied in the Jesuit schools of Győr and Košice, but in 1762 was sent to Vienna to further improve his skills under Hell’s guidance by the then newly appointed bishop of Eger, Count Károly Eszterházy (1725–99). Eszterházy was to become a contact of major importance for Hell. Educated by Jesuits in Bratislava, Trnava, and at the Collegium Germanicum et Hungari- cum in Rome, the bishop was a devoted adherent of Pope Benedict xiv (1675– 1758, r.1740–58), following him in appreciating experimental science and even  the work of the philosophes. Eszterházy nevertheless remained a con- vinced Tridentine Catholic, opposed from the outset to Habsburg ecclesiastical 107 wus, Manuscripte Hell. Transcripts of correspondence from the year 1760 are missing, whereas the transcripts from 1761 were made by another hand. 108 Weiss to Hell in Vienna, dated Trnava, December 23, 1758 (wus, secretary’s copy). Ephe- merides might here refer to a diary, or journal of observations, not necessarily the printed Ephemerides. 109 Hell, Ephemerides 1765 (1764), 322–23. 110 In the Ephemerides of Hell, Sajnovics is mentioned among the observers in Trnava from January 1767 onward. Hell, Ephemerides 1768 (1767), 272–76. 111 Szinnyei, Magyar írók; http://mek.oszk.hu/03600/03630/html/b/b00707.htm (accessed April 15, 2019).
zurück zum  Buch Maximilian Hell (1720–92) - And the Ends of Jesuit Science in Enlightenment Europe"
Maximilian Hell (1720–92) And the Ends of Jesuit Science in Enlightenment Europe