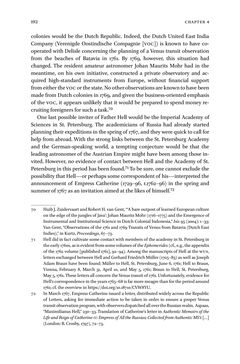 Chapter 4192 colonies would be the Dutch Republic. Indeed, the Dutch United East India Company (Verenigde Oostindische Compagnie [voc]) is known to have co- operated with Delisle concerning the planning of a Venus transit observation from the beaches of Batavia in 1761. By 1769, however, this situation had changed. The resident amateur astronomer Johan Maurits Mohr had in the meantime, on his own initiative, constructed a private observatory and ac- quired high-standard instruments from Europe, without financial support from either the voc or the state. No other observations are known to have been made from Dutch colonies in 1769, and given the business-oriented emphasis of the voc, it appears unlikely that it would be prepared to spend money re- cruiting foreigners for such a task.70 One last possible inviter of Father Hell would be the Imperial Academy of Sciences in St. Petersburg. The academicians of Russia had already started planning their expeditions in the spring of 1767, and they were quick to call for help from abroad. With the strong links between the St. Petersburg Academy and the German-speaking world, a tempting conjecture would be that the leading astronomer of the Austrian Empire might have been among those in- vited. However, no evidence of contact between Hell and the Academy of St. Petersburg in this period has been found.71 To be sure, one cannot exclude the possibility that Hell—or perhaps some correspondent of his—interpreted the announcement of Empress Catherine (1729–96, r.1762–96) in the spring and summer of 1767 as an invitation aimed at the likes of himself.72 70 Huib J. Zuidervaart and Robert H. van Gent, “‘A bare outpost of learned European culture on the edge of the jungles of Java’: Johan Maurits Mohr (1716–1775) and the Emergence of Instrumental and Institutional Science in Dutch Colonial Indonesia,” Isis 95 (2004): 1–33; Van Gent, “Observations of the 1761 and 1769 Transits of Venus from Batavia (Dutch East Indies),” in Kurtz, Proceedings, 67–73. 71 Hell did in fact cultivate some contact with members of the academy in St. Petersburg in the early 1760s, as is evident from some volumes of the Ephemerides (cf., e.g., the appendix of the 1762 volume [published 1761], 92–94). Among the manuscripts of Hell at the wus, letters exchanged between Hell and Gerhard Friedrich Müller (1705–83) as well as Joseph Adam Braun have been found: Müller to Hell, St. Petersburg, June 6, 1761; Hell to Braun, Vienna, February 8, March 31, April 10, and May 5, 1761; Braun to Hell, St. Petersburg, May 5, 1761. These letters all concern the Venus transit of 1761. Unfortunately, evidence for Hell’s correspondence in the years 1765–68 is far more meagre than for the period around 1761; cf. the overview in https://doi.org/10.18710/CVW8YU. 72 In March 1767, Empress Catherine issued a letter, distributed widely across the Republic of Letters, asking for immediate action to be taken in order to ensure a proper Venus transit observation program, with observers dispatched all over the Russian realm. Aspaas, “Maximilianus Hell,” 230–33. Translation of Catherine’s letter in Authentic Memoirs of the Life and Reign of Catherine ii: Empress of All the Russias; Collected from Authentic MS’s […] (London: B. Crosby, 1797), 72–73.
zurück zum  Buch Maximilian Hell (1720–92) - And the Ends of Jesuit Science in Enlightenment Europe"
Maximilian Hell (1720–92) And the Ends of Jesuit Science in Enlightenment Europe