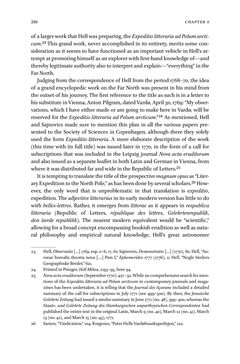 Chapter 5216 of a larger work that Hell was preparing, the Expeditio litteraria ad Polum arcti­ cum.23 This grand work, never accomplished in its entirety, merits some con- sideration as it seems to have functioned as an important vehicle in Hell’s at- tempt at promoting himself as an explorer with first-hand knowledge of—and thereby legitimate authority also to interpret and explain—“everything” in the Far North. Judging from the correspondence of Hell from the period 1768–70, the idea of a grand encyclopedic work on the Far North was present in his mind from the outset of his journey. The first reference to the title as such is in a letter to his substitute in Vienna, Anton Pilgram, dated Vardø, April 30, 1769: “My obser- vations, which I have either made or am going to make here in Vardø, will be reserved for the Expeditio litteraria ad Polum arcticum.”24 As mentioned, Hell and Sajnovics made sure to mention this plan in all the various papers pre- sented to the Society of Sciences in Copenhagen, although there they solely used the form Expeditio litteraria. A more elaborate description of the work (this time with its full title) was issued later in 1770, in the form of a call for subscriptions that was included in the Leipzig journal Nova acta eruditorum and also issued as a separate leaflet in both Latin and German in Vienna, from where it was distributed far and wide in the Republic of Letters.25 It is tempting to translate the title of the prospective magnum opus as “Liter- ary Expedition to the North Pole,” as has been done by several scholars.26 How- ever, the only word that is unproblematic in that translation is expeditio, expedition. The adjective litterarius in its early modern version has little to do with belles­ lettres. Rather, it emerges from litterae as it appears in respublica litteraria (Republic of Letters, république des lettres, Gelehrtenrepublik, den  lærde republikk). The nearest modern equivalent would be “scientific,” allowing for a broad concept encompassing bookish erudition as well as natu- ral philosophy and empirical natural knowledge. Hell’s great astronomer 23 Hell, Observatio […] 1769, esp. 2–6, 17, 61; Sajnovics, Demonstratio […] (1770), 82; Hell, “Au- rorae borealis theoria nova […] Pars I,” Ephemerides 1777 (1776), 2; Hell, “Nogle Steders Geographiske Breder,” 621. 24 Printed in Pinzger, Hell Miksa, 2:93–95, here 94. 25 Nova acta eruditorum (September 1770): 427–32. While no comprehensive search for men- tions of the Expeditio litteraria ad Polum arcticum in contemporary journals and maga- zines has been undertaken, it is telling that the Journal des Sçavans included a detailed summary of the call for subscriptions in July 1771 (see 499–500). By then, the Jenaische Gelehrte Zeitung had issued a similar summary in June 1771 (no. 48), 399–400, whereas the Staats­ und Gelehrte Zeitung des Hamburgischen unpartheyischen Correspondenten had published the entire text in the original Latin, March 9 (no. 40), March 12 (no. 41), March 13 (no. 42), and March 15 (no. 43), 1771. 26 Sarton, “Vindication,” 104; Kragemo, “Pater Hells Vardøhusekspedisjon,” 122.
zurück zum  Buch Maximilian Hell (1720–92) - And the Ends of Jesuit Science in Enlightenment Europe"
Maximilian Hell (1720–92) And the Ends of Jesuit Science in Enlightenment Europe