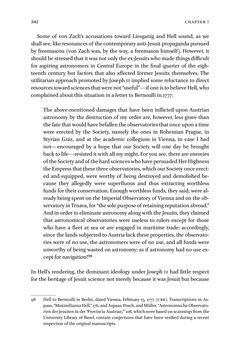 Chapter 7342 Some of von Zach’s accusations toward Liesganig and Hell sound, as we shall see, like resonances of the contemporary anti-Jesuit propaganda pursued by freemasons (von Zach was, by the way, a freemason himself). However, it should be stressed that it was not only the ex-Jesuits who made things difficult for aspiring astronomers in Central Europe in the final quarter of the eigh- teenth century but factors that also affected former Jesuits themselves. The utilitarian approach promoted by Joseph ii implied some reluctance to direct resources toward sciences that were not “useful”—if one is to believe Hell, who complained about this situation in a letter to Bernoulli in 1777: The above-mentioned damages that have been inflicted upon Austrian astronomy by the destruction of my order are, however, less grave than the fate that would have befallen the observatories that once upon a time were erected by the Society, namely the ones in Bohemian Prague, in Styrian Graz, and at the academic collegium in Vienna, in case I had not—encouraged by a hope that our Society will one day be brought back to life—resisted it with all my might. For you see, there are enemies of the Society and of the hard sciences who have persuaded Her Highness the Empress that these three observatories, which our Society once erect- ed and equipped, were worthy of being destroyed and demolished be- cause they allegedly were superfluous and thus extracting worthless funds for their conservation. Enough worthless funds, they said, were al- ready being spent on the Imperial Observatory of Vienna and on the ob- servatory in Trnava, for “the sole purpose of retaining reputation abroad.” And in order to eliminate astronomy along with the Jesuits, they claimed that astronomical observatories were useless to rulers except for those who have a fleet at sea or are engaged in maritime trade; accordingly, since the lands subjected to Austria lack these properties, the observato- ries were of no use, the astronomers were of no use, and all funds were unworthy of being wasted on astronomy: as if astronomy had no use ex- cept for navigation!98 In Hell’s rendering, the dominant ideology under Joseph ii had little respect for the heritage of Jesuit science not merely because it was Jesuit but because 98 Hell to Bernoulli in Berlin, dated Vienna, February 15, 1777 (ubb). Transcriptions in As- paas, “Maximilianus Hell,” 176, and Aspaas, Posch, and Müller, “Astronomische Observato- rien der Jesuiten in der ‘Provincia Austriae,’” 108, which were based on scannings from the University Library of Basel, contain conjectures that have been verified during a recent inspection of the original manuscripts.
zurück zum  Buch Maximilian Hell (1720–92) - And the Ends of Jesuit Science in Enlightenment Europe"
Maximilian Hell (1720–92) And the Ends of Jesuit Science in Enlightenment Europe