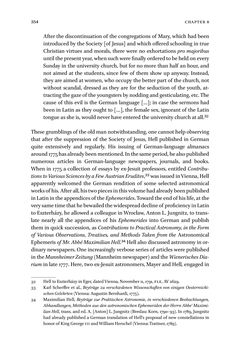 Chapter 8354 After the discontinuation of the congregations of Mary, which had been introduced by the Society [of Jesus] and which offered schooling in true Christian virtues and morals, there were no exhortations pro majoribus until the present year, when such were finally ordered to be held on every Sunday in the university church, but for no more than half an hour, and not aimed at the students, since few of them show up anyway. Instead, they are aimed at women, who occupy the better part of the church, not without scandal, dressed as they are for the seduction of the youth, at- tracting the gaze of the youngsters by nodding and gesticulating, etc. The cause of this evil is the German language […]; in case the sermons had been in Latin as they ought to […], the female sex, ignorant of the Latin tongue as she is, would never have entered the university church at all.32 These grumblings of the old man notwithstanding, one cannot help observing that after the suppression of the Society of Jesus, Hell published in German quite extensively and regularly. His issuing of German-language almanacs around 1775 has already been mentioned. In the same period, he also published numerous articles in German-language newspapers, journals, and books. When in 1775 a collection of essays by ex-Jesuit professors, entitled Contribu­ tions to Various Sciences by a Few Austrian Erudites,33 was issued in Vienna, Hell apparently welcomed the German rendition of some selected astronomical works of his. After all, his two pieces in this volume had already been published in Latin in the appendices of the Ephemerides. Toward the end of his life, at the very same time that he bewailed the widespread decline of proficiency in Latin to Eszterházy, he allowed a colleague in Wrocław, Anton L. Jungnitz, to trans- late nearly all the appendices of his Ephemerides into German and publish them in quick succession, as Contributions to Practical Astronomy, in the Form of Various Observations, Treatises, and Methods Taken from the Astronomical Ephemeris of Mr. Abbé Maximilian Hell.34 Hell also discussed astronomy in or- dinary newspapers. One increasingly verbose series of articles were published in the Mannheimer Zeitung (Mannheim newspaper) and the Wienerisches Dia­ rium in late 1777. Here, two ex-Jesuit astronomers, Mayer and Hell, engaged in 32 Hell to Eszterházy in Eger, dated Vienna, November 11, 1791, fle, AV 2629. 33 Karl Scherffer et al., Beyträge zu verschiedenen Wissenschaften von einigen Oesterreichi­ schen Gelehrten (Vienna: Augustin Bernhardi, 1775). 34 Maximilian Hell, Beyträge zur Praktischen Astronomie, in verschiedenen Beobachtungen, Abhandlungen, Methoden aus den astronomischen Ephemeriden der Herrn Abbe’ Maximi­ lian Hell, trans. and ed. A. [Anton] L. Jungnitz (Breslau: Korn, 1790–93). In 1789, Jungnitz had already published a German translation of Hell’s proposal of new constellations in honor of King George iii and William Herschel (Vienna: Trattner, 1789).
zurück zum  Buch Maximilian Hell (1720–92) - And the Ends of Jesuit Science in Enlightenment Europe"
Maximilian Hell (1720–92) And the Ends of Jesuit Science in Enlightenment Europe