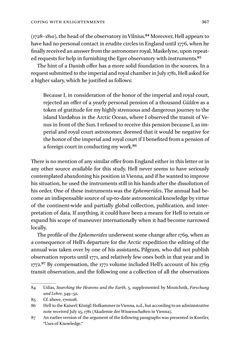 367Coping with Enlightenments (1728–1810), the head of the observatory in Vilnius.84 Moreover, Hell appears to have had no personal contact in erudite circles in England until 1776, when he finally received an answer from the astronomer royal, Maskelyne, upon repeat- ed requests for help in furnishing the Eger observatory with instruments.85 The hint of a Danish offer has a more solid foundation in the sources. In a request submitted to the imperial and royal chamber in July 1781, Hell asked for a higher salary, which he justified as follows: Because I, in consideration of the honor of the imperial and royal court, rejected an offer of a yearly personal pension of a thousand Gülden as a token of gratitude for my highly strenuous and dangerous journey to the island Vardøhus in the Arctic Ocean, where I observed the transit of Ve- nus in front of the Sun. I refused to receive this pension because I, as im- perial and royal court astronomer, deemed that it would be negative for the honor of the imperial and royal court if I benefited from a pension of a foreign court in conducting my work.86 There is no mention of any similar offer from England either in this letter or in any other source available for this study. Hell never seems to have seriously contemplated abandoning his position in Vienna, and if he wanted to improve his situation, he used the instruments still in his hands after the dissolution of his order. One of these instruments was the Ephemerides. The annual had be- come an indispensable source of up-to-date astronomical knowledge by virtue of the continent-wide and partially global collection, publication, and inter- pretation of data. If anything, it could have been a means for Hell to retain or expand his scope of maneuver internationally when it had become narrowed locally. The profile of the Ephemerides underwent some change after 1769, when as a consequence of Hell’s departure for the Arctic expedition the editing of the annual was taken over by one of his assistants, Pilgram, who did not publish observation reports until 1771, and relatively few ones both in that year and in 1772.87 By compensation, the 1771 volume included Hell’s account of his 1769 transit observation, and the following one a collection of all the observations 84 Udías, Searching the Heavens and the Earth, 5, supplemented by Moutchnik, Forschung und Lehre, 349–52. 85 Cf. above, 170n108. 86 Hell to the Kaiserl: Königl: Hofkammer in Vienna, n.d., but according to an administrative note received July 25, 1781 (Akademie der Wissenschaften in Vienna). 87 An earlier version of the argument of the following paragraphs was presented in Kontler, “Uses of Knowledge.”
zurück zum  Buch Maximilian Hell (1720–92) - And the Ends of Jesuit Science in Enlightenment Europe"
Maximilian Hell (1720–92) And the Ends of Jesuit Science in Enlightenment Europe