Search engines - "web dragons" - are the portals through which we access society's treasure trove of information. This talk will take a critical look at how they work and the role they play in today's society, touching on social issues such as web spam, privacy, and the difference between the dragons' motivation and ours. 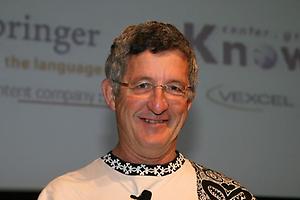 Ian Witten
Ian H. Witten is Professor of Computer Science at the University of Waikato in New Zealand where he directs the New Zealand Digital Library research project. His research interests include information retrieval, machine learning, text compression, and programming by demonstration. He has published widely in these areas, including several books, the most recent being Managing Gigabytes (1999), How to build a digital library (2003), Data Mining (2005) and Web Dragons (2007), all from Morgan Kaufmann. He received an MA in mathematics from Cambridge Unversity, England; an MSc in computer science from the University of Calgary, Canada; and a PhD in electrical engineering from Essex University, England. He is a fellow of the ACM and of the Royal Society of New Zealand. He received the 2004 IFIP Namur Award, a biennial honour accorded for "outstanding contribution with international impact to the awareness of social implications of information and communication technology" and the 2005 SIGKDD Service Award for "an outstanding contribution to the data mining field" and in 2006 the Royal Society of New Zealand Hector Medal for "an outstanding contribution to the advancement of the mathematical and information sciences." (Witten was also one of the first graduate students of Hermann Maurer in Calgary in 1966!)

Cryptology is a key enabling technology for information security. In the 1990s, cryptography has moved from closed hardware systems to software implementations and mass market use; the next step will be an environment with cryptography everywhere, that is, from desktops, PDAs and phones to identity cards, household goods, sensor networks and RFID tags. In this talk we review the recent developments in cryptography; this includes the weaknesses discovered in hash functions and stream ciphers, the development of new side channel attacks, and the design of advanced cryptographic algorithms. Next we will attempt to predict how cryptographic algorithms and protocols wil look like in 2020 and what the research challenges are today and 15 years from now. We also discuss the impact of quantum cryptography and of quantum computing. 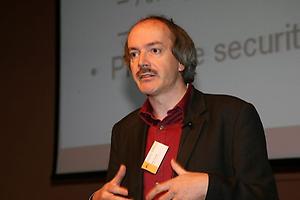 Bart Preneel
Bart Preneel received the Electrical Engineering degree and the Doctorate in Applied Sciences from the Katholieke Universiteit Leuven (Belgium). He is currently professor (hoogleraar) at the Katholieke Universiteit Leuven. He was visiting professor at several universities in Europe (Graz, Austria, Ghent, Belgium, Bergen, Norway and Bochum, Germany). During the academic year 1993-1994, he was a research fellow of the EECS Department of the University of California at Berkeley. His main research interests are cryptography, network security, and wireless communications. He has authored and co-authored more than 180 scientific publications and is an inventor of two patents. He is vice president of the IACR (International Association for Cryptologic Research) and a member of the Editorial Board of the Journal of Cryptology, the IEEE Transactions on Informations and Security, and the ACM Transactions on Information Security. He is also a Member of the Accreditation Board of the Computer and Communications Security Reviews (ANBAR, UK). He has participated to more than 15 research projects sponsored by the European Commission, for four of these as project manager. He is currently project manager of the European Network of Excellene ECRYPT (http://www.ecrypt.eu.org),m which groups more than 250 researchers in the area of cryptology and watermarking. He has been program chair of five international conferences (including Eurocrypt 2000 and SAC 2005) and he has been been invited speaker at 15 conferences; he has served on the program committee of more than 60 conferences. In 2003, he has received the European Information Security Award in the area of academic research, and he received an honorary Certified Information Security Manager (CISM) designation by the Information Systems Audit and Control Association (ISACA). Since 1989, he is a Belgian expert in working group ISO/IEC JTC1/SC27/WG2 (Security Techniques and Mechanisms), where he has edited five international standards.
Continue to Track 1
< vorheriger Artikel zum vorigen Artikel: 'Gruppe 7'
nächster Artikel >zum nächsten Artikel: 'Gruppe 6'