Franz Josef Radermacher is proposing a strategy of continued use of carbon fuels and yet (surprise!) suggests it will be climate-neutral.

The primary energy source will be the sun; preferably in regions with reliable heavy sunshine. Solar power will be used for electrolysis of water into hydrogen (H2) and oxygen (O2). Hydrogen molecules will be chemically bound with carbon dioxide (CO2), creating Methanol (CH3OH) (schematic Figure 1). 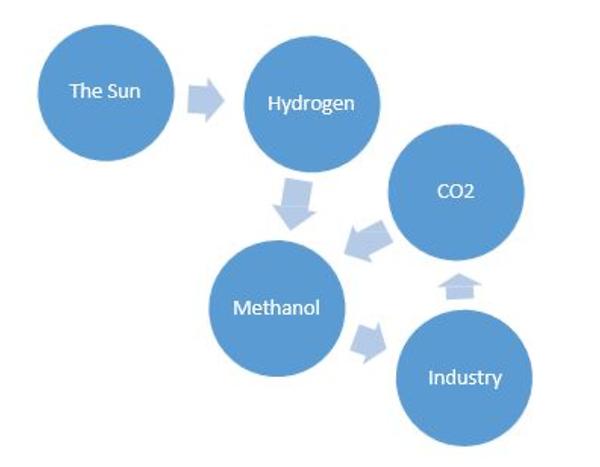 Fig. 1: Methanol Zyklus, &copy F.J. Radermacher. Solar energy drives electrolysis to separate 2H2 and O2. H2 and CO2 make Methanol (CH3- OH. That can be burnt in industry or vehicles releasing CO2. The process includes large scale CO2 recycling.
Methanol is a liquid fuel suitable for cars, for industry and a broad range of further uses. Burning it creates mechanical power – and CO2. The CO2 can be captured and “recycled” into new methanol using the energy of the hydrogen molecules.

Methanol can be produced in large quantities and can theoretically substitute fossil fuels. This way, conventional industries currently burning fossil fuels can remain while CO2 emissions are dramatically reduced. A fourfold recycling of CO2 can be reached. Still there will be CO2 emissions left. These can be entirely absorbed by healthy soils using terra preta or organic charcoal. Productivity of soils can be considerably increased this way. This will be required anyway to feed humankind in the future. Planting trees is an important element of the approach.

The idea is to maintain and extend classical industry and vehicles thereby avoiding colossal capital destruction while allowing for the needed economic progress in Africa, in India etc. All these countries have China as their development role-model. Compared with the widely propagated full electrification supplanting all internal combustion processes, the methanol method appears much more economically and politically acceptable.

The methanol production can, e.g., be done at large scale in North Africa where steady and reliable sunshine makes the process roughly three times cheaper than in temperate zones. Using the North African and Arabian deserts (as well as other suitable deserts) for the creation of gigantic added value resembles the Desertec idea proposed by the Club of Rome in 2003. At that time Prince El Hasan Bin Talal served as President of the Club of Rome. But the old scheme imagined essentially the transmission of enormous amounts of electrical power through the Mediterranean Sea, and has been largely abandoned, except for small size power stations in Morocco and elsewhere. Among other reasons massive resistance against the needed long-distance transmission lines for electricity made the approach infeasible.

By comparison, the methanol idea sounds technically and economically much more feasible. It can be called "Desertec 2.0". The approach offers enormous investment opportunities for one of the strongest industries in the world which is offered a prosperous future instead of the risk of getting stranded by decarbonization – with all negative societal consequences of such a breakdown. Calculation shows that the needed investments are comparable to today’s investment of this sector into finding new fossil energy depots. New depots will not be needed for a long time within the methanol economy.

Two problems should be mentioned: (i) Water is scarce in the desert areas; in coastal regions, however, it is abundantly available. Obviously, desalination is highly fitting with the methanol economy approach. (ii) Conventional industry size agriculture shows no propensity for applying CO2 capturing using soil fertilization with terra preta and the like. Considerable resistance can be expected. However, regulation and financial input from the carbon and methanol side will probably change the picture. That is, because developing soils into CO2-sinks is also needed to feed a growing world population on a higher level of prosperity – and that is what the whole issue is about.

The full methanol story by F.J. Radermacher (in German).#