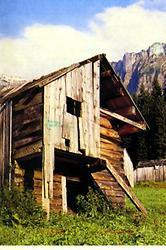 Yodeln, i.e. singing on syllabels without meaning as words and a perceptive difference between head and breast voice, is one of the most advanced forms of alpine folkmusic that reminds us of the archaic open-air music of shepherds and farmers in the high pastures. (Illustration, Blaa-Alm). The lustige Baeurin (The happy farm wife), is a so-called Dreier that has been diffused under a variety of names and texts; two very freely improvised voices accompany the main voice. (G. Haid)