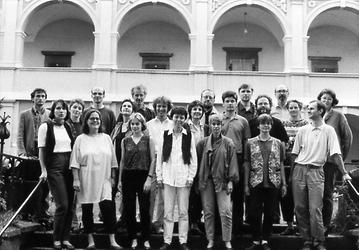 Johann Stadlmayr (ca. 1570 Freising/Germany - 1648 Innsbruck/Tyrol) was the court chapelmaster of Archduke Maximilian of Tyrol, who thought very highly of him. After the Archduke's death, his court chapel was dissolved as was the custom in those days. Stadlmayr stayed in Innsbruck however even though he only received a small pension. He later decided to apply for the position of chapelmaster at St. Stephen's Cathedral in Vienna. but the next governor in Innsbruck, Archduke Leopold of Tyrol, offered him a larger salary and extra rewards to stay there in his service. A large part of Stalmayr's works was published. Most of them were destined for ecclesiastical use and are typically polyphonic (he only used homophonic elements late in his life) and pay great attention to the treatment of the texts. The illustration shows the Capella nova, which served as the venue for the recording of Ave maris stella presented here. (E. Stadler)