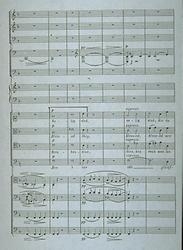 Johannes Brahms (1833 Hamburg/Germany - 1897 Vienna) was a sceptic when it came to religious matters. He chose a text for his Deutsche Requiem (A German Requiem)(1869) without any references to Christ. In keeping with this attitude, he ends the work not with the glorification of Christ's death as redeemer but rather chooses the unusual phrase Selig sind die Toten, die in dem Herrn sterben, von nun an (Blessed are they who die in the Lord, forevermore). This creates a certain relationship with the Kyrie but one which emphasizes the Sermon on the Mount. Both the text and the musical expression of these movements create a parallel: the circle between the Living and the Dead is complete.

The musical example presents the Kyrie. You should especially notice the first three notes in the Soprano part because they return in various forms throughout the work and thus give it a unifying thematic element to create cohesion. (E. Stadler)