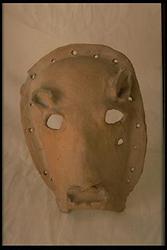 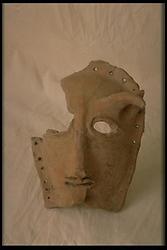 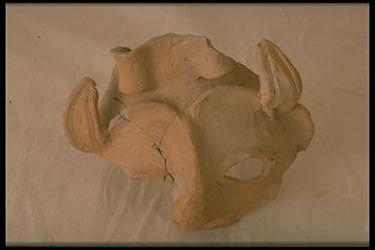 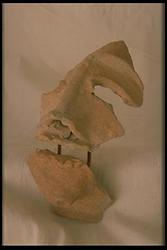 It was only at the beginning of the 20th century that clay masks and mask fragments dating from the 2nd c. A.D. were discovered near the town of Mautern on the Danube.

The first pictures shows a complete mask in the shape of a calf's head.

The mask in in the second figure is supposed to be a devil ("Teufelsfratze") with animal ears and horns but otherwise human.

The fragment of a mask shown in figure three looks like a pig's head,

the one in the last picture has human features.

The masks may have been destined for heathen masquerades at the beginning of the new year that the church had prohibited, or for the period of Lent. These are the so-called calf-and-deer imitations ("Kälbchen- und Hirschlein-Darstellen") and the "Monstra" (devil's mask). Similar animal masks can be found all around the world, especially during periods of a changing season. (E. Stadler)