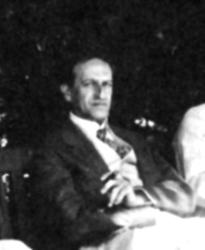 The Operetta and Hollywood composer, Oscar Straus (1870 Vienna - 1954 Bad Ischl/Upper Austria) was one of very few emigrants who were lucky enough to managae a new start in Europe. In 1950, the aged composer met Max Ophuls in Paris by chance, just when Ophuls was finally able to make a film of Schnitzler's Reigen (Round Dance) with music by Straus. Straus intimated the decadent atmosphere of the subject with his Reigen waltz and returned to the musical language of his youth (Illustration, Straus as a young man). It is possible to explain the popularity of the Reigen-Walzer (Example, main theme of the Waltz) on its own with the composer's ability to give the waltz idiom the dimension of an apparently eternal means of expression. (M. Saary)