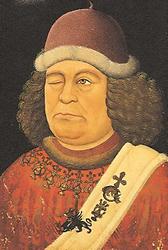 Oswald von Wolkenstein (ca 1377 Schöneck/Tyrol - 1445 Meran) came from the Tyrolean noble family of the Vilander und took over the castle Hauenstein after his father's death. Wolkenstein's life is well-documented because he was not only a talented poet but also politically active in the service of King Siegmund. Some 130 of his songs were collected in three manuscripts with their melodies. These are mostly love songs but also some about his trips, politics and religious views. Like Neidhart, Oswald refers to the life of the peasants in his Minnesang but he doesn't mock them like Neidhart. The illustration shows a portrait of Wolkenstein in the Innsbrucker Liederhandschrift (Innsbruck Song Manuscript). The musical example is the song Trautes Berbelin. (E. Stadler)