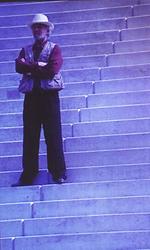 Starting in 1979 the banks of the Danube in Linz's Danube Park have become an apparently unlimitied concert hall in September every year, when the Multimedia-Festival called "Ars Electronica" - sponsored by the Brucknerhaus in Linz and the ORF (Austrian Broadcasting System) Linz. At this time, thousends of visitors can participate via lodspeakers in a gigantic musical experience. Otto M. Zykan (1935 Vienna) was once a member of the famous Viennese Boy's Choir, is a pianist and the composer (Illustration) of the successful opera Singers Naehmaschine ist die beste (Singer's Sewing Machine is the Best) as well as a co-worker on the artificial Humanic-Werbung (i.e., ad for Humanic, an Austrian shoe company). In 1994, he wrote the concrete, film-like music for Hans Hoffer's production of Odysseus defining this open-air spectacle with his individual concept of up-to-date electronic music (Example). His music supports the visualization of the drama with precise sounds. (M. Saary)