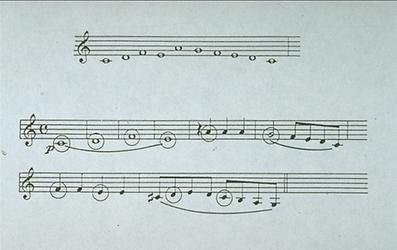 Wolfgang Amadeus Mozart (1756 Salzburg - 1791 Vienna) composed his Jupiter Symphony (KV 551) in 1788. The main theme of the Finale is divided into two contrasting parts, whose common source is a broad melody which Mozart also used in the Credo of a mass (KV 192). The first part presents the theme in majestic evenness, something like a Gregorian chant; the second part starts on the upbeat and uses lively rhythms. This main theme is then introduced by the various groups of instruments one after the other: first the strings alone, which are divided in two groups in an analogy to the thematic division. When the theme is repeated, the brass is added and the theme exudes a bright, fanfare-like character. (E. Stadler)