Seite - 10 - in The Austrian Business Cycle in the European Context 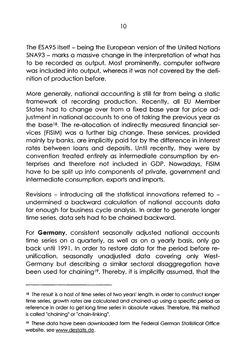 10 The ESA95 itself - being the European version of the United Nations SNA93 - marks a massive change in the interpretation of what has to be recorded as output. Most prominently, computer software was included into output, whereas it was not covered by the defi- nition of production before. More generally, national accounting is still far from being a static framework of recording production. Recently, all EU Member States had to change over from a fixed base year for price ad- justment in national accounts to one of taking the previous year as the base18• The re-allocation of indirectly measured financial ser- vices (FISIM) was a further big change. These services, provided mainly by banks, are implicitly paid for by the difference in interest rates between loans and deposits. Until recently, they were by convention treated entirely as intermediate consumption by en- terprises and therefore not included in GDP. Nowadays, FISIM have to be split up into components of private, government and intermediate consumption, exports and imports. Revisions - introducing all the statistical innovations referred to - undermined a backward calculation of national accounts data far enough for business cycle analysis. In order to generate longer time series, data sets had to be chained backward. For Germany, consistent seasonally adjusted national accounts time series on a quarterly, as well as on a yearly basis, only go back until 1991. In order to restore data for the period before re- unification, seasonally unadjusted data covering only West- Germany but describing a similar sectoral disaggregation have been used for chaining19• Thereby, it is implicitly assumed, that the 18 The result is a host of time series of two years' length. In order to construct longer time series, growth rates are calculated and chained up using a specific period as reference in order to get long time series in absolute values. Therefore, this method is called "chaining" or "chain-linking". 19 These data have been downloaded form the Federal German Statistical Office website, see www.destatis.de.
zurück zum  Buch The Austrian Business Cycle in the European Context"
The Austrian Business Cycle in the European Context
Forschungsergebnisse der Wirtschaftsuniversitat Wien