Seite - 64 - in The Austrian Business Cycle in the European Context 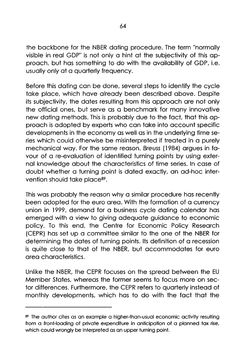 64 the backbone for the NBER dating procedure. The term "normally visible in real GDP" is not only a hint at the subjectivity of this ap- proach, but has something to do with the availability of GDP, i.e. usually only at a quarterly frequency. Before this dating can be done, several steps to identify the cycle take place, which have already been described above. Despite its subjectivity, the dates resulting from this approach are not only the official ones, but serve as a benchmark for many innovative new dating methods. This is probably due to the fact, that this ap- proach is adopted by experts who can take into account specific developments in the economy as well as in the underlying time se- ries which could otherwise be misinterpreted if treated in a purely mechanical way. For the same reason, Breuss ( 1984) argues in fa- vour of a re-evaluation of identified turning points by using exter- nal knowledge about the characteristics of time series. In case of doubt whether a turning point is dated exactly, an ad-hoc inter- vention should take places9• This was probably the reason why a similar procedure has recently been adopted for the euro area. With the formation of a currency union in 1999, demand for a business cycle dating calendar has emerged with a view to giving adequate guidance to economic policy. To this end, the Centre for Economic Policy Research (CEPR) has set up a committee similar to the one of the NBER for determining the dates of turning points. Its definition of a recession is quite close to that of the NBER, but accommodates for euro area characteristics. Unlike the NBER, the CEPR focuses on the spread between the EU Member States, whereas the former seems to focus more on sec- tor differences. Furthermore, the CEPR refers to quarterly instead of monthly developments, which has to do with the fact that the 89 The author cites as an example a higher-than-usual economic activity resulting from a front-loading of private expenditure in anticipation of a planned tax rise, which could wrongly be interpreted as an upper turning point.
zurück zum  Buch The Austrian Business Cycle in the European Context"
The Austrian Business Cycle in the European Context
Forschungsergebnisse der Wirtschaftsuniversitat Wien