Seite - 27 - in Jacopo Strada and Cultural Patronage at the Imperial Court - The Antique as Innovation, Band 1 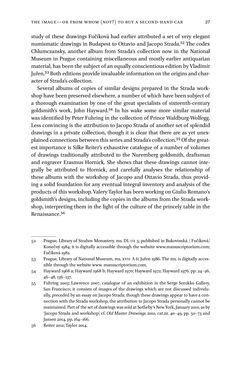 27The Image—Or from Whom (Not?) to Buy a Second-Hand Car study of these drawings Fučíková had earlier attributed a set of very elegant numismatic drawings in Budapest to Ottavio and Jacopo Strada.52 The codex Chlumczansky, another album from Strada’s collection now in the National Museum in Prague containing miscellaneous and mostly earlier antiquarian material, has been the subject of an equally conscientious edition by Vladimír Juřen.53 Both editions provide invaluable information on the origins and char- acter of Strada’s collection. Several albums of copies of similar designs prepared in the Strada work- shop have been preserved elsewhere, a number of which have been subject of a thorough examination by one of the great specialists of sixteenth-century goldsmith’s work, John Hayward.54 In his wake some more similar material was identified by Peter Fuhring in the collection of Prince Waldburg-Wolfegg. Less convincing is the attribution to Jacopo Strada of another set of splendid drawings in a private collection, though it is clear that there are as yet unex- plained connections between this series and Strada’s collection.55 Of the great- est importance is Silke Reiter’s exhaustive catalogue of a number of volumes of drawings traditionally attributed to the Nuremberg goldsmith, draftsman and engraver Erasmus Hornick. She shows that these drawings cannot inte- grally be attributed to Hornick, and carefully analyses the relationship of these albums with the workshop of Jacopo and Ottavio Strada, thus provid- ing a solid foundation for any eventual integral inventory and analysis of the products of this workshop. Valery Taylor has been working on Giulio Romano’s goldsmith’s designs, including the copies in the albums from the Strada work- shop, interpreting them in the light of the culture of the princely table in the Renaissance.56 52 Prague, Library of Strahov Monastery, ms. DL iii 3; published in Bukovinská / Fučíková/ Konečný 1984; it is digitally accessible through the website www.manuscriptorium.com; Fučíková 1982. 53 Prague, Library of National Museum, ms. xvii A 6; Juřen 1986. The ms. is digitally acces- sible through the website www. manuscriptorium.com. 54 Hayward 1968 a; Hayward 1968 b; Hayward 1970; Hayward 1972; Hayward 1976, pp. 24–26, 46–48, 136–137. 55 Fuhring 2003; Lawrence 2007, catalogue of an exhibition in the Serge Sorokko Gallery, San Francisco; it consists of images of the drawings which are not discussed individu- ally, preceded by an essay on Jacopo Strada; though these drawings appear to have a con- nection with the Strada workshop, the attribution to Jacopo Strada personally cannot be maintained. Part of the set of drawings was sold at Sotheby’s New York, January 2010, as by ‘Jacopo Strada and workshop’, cf. Old Master Drawings 2010, cat.nr. 40–49, pp. 50–73 and Jansen 2014, pp. 164–166. 56 Reiter 2012; Taylor 2014.
zurück zum  Buch Jacopo Strada and Cultural Patronage at the Imperial Court - The Antique as Innovation, Band 1"
Jacopo Strada and Cultural Patronage at the Imperial Court The Antique as Innovation, Band 1