Seite - 89 - in Jacopo Strada and Cultural Patronage at the Imperial Court - The Antique as Innovation, Band 1 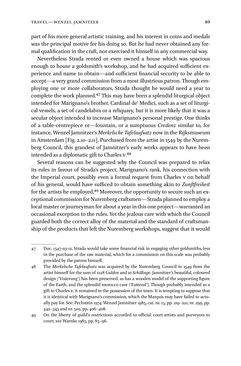 89Travel—Wenzel Jamnitzer part of his more general artistic training, and his interest in coins and medals was the principal motive for his doing so. But he had never obtained any for- mal qualification in the craft, nor exercised it himself in any commercial way. Nevertheless Strada rented or even owned a house which was spacious enough to house a goldsmith’s workshop, and he had acquired sufficient ex- perience and name to obtain—and sufficient financial security to be able to accept—a very grand commission from a most illustrious patron. Though em- ploying one or more collaborators, Strada thought he would need a year to complete the work planned.47 This may have been a splendid liturgical object intended for Marignano’s brother, Cardinal de’ Medici, such as a set of liturgi- cal vessels, a set of candelabra or a reliquary, but it is more likely that it was a secular object intended to increase Marignano’s personal prestige. One thinks of a table-centrepiece or—fountain, or a sumptuous Credenz similar to, for instance, Wenzel Jamnitzer’s Merkelsche Tafelaufsatz now in the Rijksmuseum in Amsterdam [Fig. 2.10–2.11]. Purchased from the artist in 1549 by the Nurem- berg Council, this grandest of Jamnitzer’s early works appears to have been intended as a diplomatic gift to Charles v.48 Several reasons can be suggested why the Council was prepared to relax its rules in favour of Strada’s project. Marignano’s rank, his connection with the Imperial court, possibly even a formal request from Charles v on behalf of his general, would have sufficed to obtain something akin to Zunftfreiheit for the artists he employed.49 Moreover, the opportunity to secure such an ex- ceptional commission for Nuremberg craftsmen—Strada planned to employ a local master or journeyman for about a year in this one project—warranted an occasional exception to the rules. Yet the jealous care with which the Council guarded both the correct alloy of the material and the standard of craftsman- ship of the products that left the Nuremberg workshops, suggest that it would 47 Doc. 1547-03-12. Strada would take some financial risk in engaging other goldsmiths, less in the purchase of the raw material, which for a commission on this scale was probably provided by the patron himself. 48 The Merkelsche Tafelaufsatz was acquired by the Nuremberg Council in 1549 from the artist himself for the sum of 1228 Gulden and 10 Schillinge. Jamnitzer’s beautiful, coloured design (‘Visierung’) has been preserved, as has a wooden model of the supporting figure of the Earth, and the splendid morocco case (‘Futteral’). Though probably intended as a gift to Charles v, it remained in the possession of the town. It is tempting to suppose that it is identical with Marignano’s commission, which the Marquis may have failed to actu- ally pay for. See: Pechstein 1974; Wenzel Jamnitzer 1985, cat. nr. 15, pp. 219–221; nr. 299, pp. 342–343 and nr. 502, pp. 406–408. 49 On the liberty of guild’s restrictions accorded to official court-artists and purveyors to court, see Warnke 1985, pp. 85–96.
zurück zum  Buch Jacopo Strada and Cultural Patronage at the Imperial Court - The Antique as Innovation, Band 1"
Jacopo Strada and Cultural Patronage at the Imperial Court The Antique as Innovation, Band 1