Seite - 153 - in Jacopo Strada and Cultural Patronage at the Imperial Court - The Antique as Innovation, Band 1 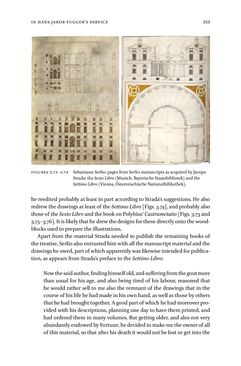 153In Hans Jakob Fugger’s Service Figures 3.73–3.74 Sebastiano Serlio: pages from Serlio manuscripts as acquired by Jacopo Strada: the Sesto Libro (Munich, Bayerische Staatsbibliotek) and the Settimo Libro (Vienna, Österreischische Nationalbibliothek). he reedited probably at least in part according to Strada’s suggestions. He also redrew the drawings at least of the Settimo Libro [Figs. 3.74], and probably also those of the Sesto Libro and the book on Polybius’ Castrametatio [Figs.  3.73 and 3.75–3.76]. It is likely that he drew the designs for these directly onto the wood- blocks used to prepare the illustrations. Apart from the material Strada needed to publish the remaining books of the treatise, Serlio also entrusted him with all the manuscript material and the drawings he owed, part of which apparently was likewise intended for publica- tion, as appears from Strada’s preface to the Settimo Libro: Now the said author, finding himself old, and suffering from the gout more than usual for his age, and also being tired of his labour, reasoned that he would rather sell to me also the remnant of the drawings that in the course of his life he had made in his own hand, as well as those by others that he had brought together. A good part of which he had moreover pro- vided with his descriptions, planning one day to have them printed, and had ordered them in many volumes. But getting older, and also not very abundantly endowed by Fortune, he decided to make me the owner of all of this material, so that after his death it would not be lost or get into the
zurück zum  Buch Jacopo Strada and Cultural Patronage at the Imperial Court - The Antique as Innovation, Band 1"
Jacopo Strada and Cultural Patronage at the Imperial Court The Antique as Innovation, Band 1