Seite - 154 - in Jacopo Strada and Cultural Patronage at the Imperial Court - The Antique as Innovation, Band 1 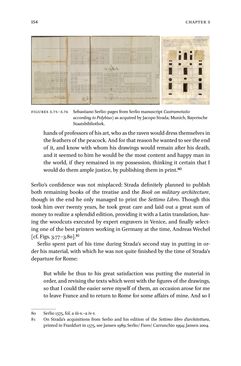 Chapter 3154 hands of professors of his art, who as the raven would dress themselves in the feathers of the peacock. And for that reason he wanted to see the end of it, and know with whom his drawings would remain after his death, and it seemed to him he would be the most content and happy man in the world, if they remained in my possession, thinking it certain that I would do them ample justice, by publishing them in print.80 Serlio’s confidence was not misplaced: Strada definitely planned to publish both remaining books of the treatise and the Book on military architecture, though in the end he only managed to print the Settimo Libro. Though this took him over twenty years, he took great care and laid out a great sum of money to realize a splendid edition, providing it with a Latin translation, hav- ing the woodcuts executed by expert engravers in Venice, and finally select- ing one of the best printers working in Germany at the time, Andreas Wechel [cf.  Figs.  3.77–3.80].81 Serlio spent part of his time during Strada’s second stay in putting in or- der his material, with which he was not quite finished by the time of Strada’s departure for Rome: But while he thus to his great satisfaction was putting the material in order, and revising the texts which went with the figures of the drawings, so that I could the easier serve myself of them, an occasion arose for me to leave France and to return to Rome for some affairs of mine. And so I 80 Serlio 1575, fol. a iii-v.–a iv-r. 81 On Strada’s acquisitions from Serlio and his edition of the Settimo libro d’architettura, printed in Frankfurt in 1575, see Jansen 1989; Serlio/ Fiore/ Carrunchio 1994; Jansen 2004. Figures 3.75–3.76 Sebastiano Serlio: pages from Serlio manuscript Castrametatio according to Polybius) as acquired by Jacopo Strada; Munich, Bayerische Staatsbibliothek.
zurück zum  Buch Jacopo Strada and Cultural Patronage at the Imperial Court - The Antique as Innovation, Band 1"
Jacopo Strada and Cultural Patronage at the Imperial Court The Antique as Innovation, Band 1