Seite - 159 - in Jacopo Strada and Cultural Patronage at the Imperial Court - The Antique as Innovation, Band 1 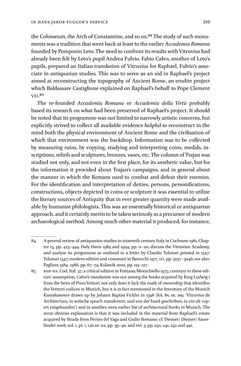 159In Hans Jakob Fugger’s Service the Colosseum, the Arch of Constantine, and so on.84 The study of such monu- ments was a tradition that went back at least to the earlier Accademia Romana founded by Pomponio Leto. The need to confront its results with Vitruvius had already been felt by Leto’s pupil Andrea Fulvio. Fabio Calvo, another of Leto’s pupils, prepared an Italian translation of Vitruvius for Raphael, Fulvio’s asso- ciate in antiquarian studies. This was to serve as an aid in Raphael’s project aimed at reconstructing the topography of Ancient Rome, an erudite project which Baldassare Castiglione explained on Raphael’s behalf to Pope Clement vii.85 The re-founded Accademia Romana or Accademia della Virtù probably based its research on what had been preserved of Raphael’s project. It should be noted that its programme was not limited to narrowly artistic concerns, but explicitly strived to collect all available evidence helpful to reconstruct in the mind both the physical environment of Ancient Rome and the civilisation of which that environment was the backdrop. Information was to be collected by measuring ruins, by copying, studying and interpreting coins, medals, in- scriptions, reliefs and sculptures, bronzes, vases, etc. The column of Trajan was studied not only, and not even in the first place, for its aesthetic value, but for the information it provided about Trajan’s campaigns, and in general about the manner in which the Romans used to combat and defeat their enemies. For the identification and interpretation of deities, persons, personifications, constructions, objects depicted in coins or sculpture it was essential to utilize the literary sources of Antiquity that in ever greater quantity were made avail- able by humanist philologists. This was an essentially historical or antiquarian approach, and it certainly merits to be taken seriously as a precursor of modern archaeological method. Among much other material it produced, for instance, 84 A general review of antiquarian studies in sixteenth century Italy in Cochrane 1981, Chap- ter 15, pp. 423–444. Daly Davis 1989 and 1994, pp. 11–20, discuss the Vitruvian Academy, and analyse its programme as outlined in a letter by Claudio Tolomei printed in 1547: Tolomei 1547; modern edition and comment in Barocchi 1977, iii, pp. 3037–3046; see also: Pagliara 1984–1986, pp. 67–74; Kulawik 2002, pp. 119–127. 85 bsb-hs, Cod. Ital. 37; a critical edition in Fontana/Morachiello 1975; contrary to these edi- tors’ assumption, Calvo’s translation was not among the books acquired by King Ludwig i from the heirs of Piero Vettori: not only does it lack the mark of ownership that identifies the Vetttori codices in Munich, but it is in fact mentioned in the Inventory of the Munich Kunstkammer drawn up by Johann Baptist Fickler in 1598 (fol. 8v, nr. 109: ‘Vitruvius de Architectura, in welsche sprach transferiert, und von der hand geschriben, in ein alt cop- ert eingebunden’) and in another, even earlier list of architectural books in Munich. The most obvious explanation is that it was included in the material from Raphael’s estate acquired by Strada from Perino del Vaga and Giulio Romano; cf. Diemer/ Diemer/ Sauer- länder 2008, vol. 1, pt. 1, cat.nr. 112, pp. 39–40, and vol. 3, pp. 230, 241, 252 and 491.
zurück zum  Buch Jacopo Strada and Cultural Patronage at the Imperial Court - The Antique as Innovation, Band 1"
Jacopo Strada and Cultural Patronage at the Imperial Court The Antique as Innovation, Band 1