Seite - 175 - in Jacopo Strada and Cultural Patronage at the Imperial Court - The Antique as Innovation, Band 1 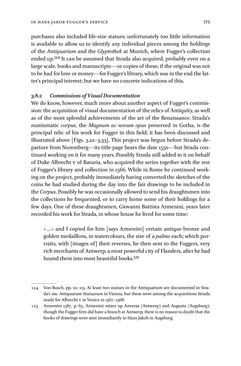 175In Hans Jakob Fugger’s Service purchases also included life-size statues; unfortunately too little information is available to allow us to identify any individual pieces among the holdings of the Antiquarium and the Glyptothek at Munich, where Fugger’s collection ended up.124 It can be assumed that Strada also acquired, probably even on a large scale, books and manuscripts—or copies of these, if the original was not to be had for love or money—for Fugger’s library, which was in the end the lat- ter’s principal interest; but we have no concrete indications of this. 3.8.2 Commissions of Visual Documentation We do know, however, much more about another aspect of Fugger’s commis- sion: the acquisition of visual documentation of the relics of Antiquity, as well as of the most splendid achievements of the art of the Renaissance. Strada’s numismatic corpus, the Magnum ac novum opus preserved in Gotha, is the principal relic of his work for Fugger in this field; it has been discussed and illustrated above [Figs. 3.22–3.33]. This project was begun before Strada’s de- parture from Nuremberg—its title-page bears the date 1550—but Strada con- tinued working on it for many years. Possibly Strada still added to it on behalf of Duke Albrecht v of Bavaria, who acquired the series together with the rest of Fugger’s library and collection in 1566. While in Rome he continued work- ing on the project, probably immediately having converted the sketches of the coins he had studied during the day into the fair drawings to be included in the Corpus. Possibly he was occasionally allowed to send his draughtsmen into the collections he frequented, or to carry home some of their holdings for a few days. One of these draughtsmen, Giovanni Battista Armenini, years later recorded his work for Strada, in whose house he lived for some time: <…> and I copied for him [says Armenini] certain antique bronze and golden medaillons, in watercolours, the size of a palmo each; which por- traits, with [images of] their reverses, he then sent to the Fuggers, very rich merchants of Antwerp, a most powerful city of Flanders, after he had bound them into most beautiful books.125 124 Von Busch, pp. 111–113. At least two statues in the Antiquarium are documented in Stra- da’s ms. Antiquarum Statuarum in Vienna, but these were among the acquisitions Strada made for Albrecht v in Venice in 1567–1568. 125 Armenini 1587, p. 65. Armenini mixes up Anversa (Antwerp) and Augusta (Augsburg): though the Fugger firm did have a branch at Antwerp, there is no reason to doubt that the books of drawings were sent immediately to Hans Jakob in Augsburg.
zurück zum  Buch Jacopo Strada and Cultural Patronage at the Imperial Court - The Antique as Innovation, Band 1"
Jacopo Strada and Cultural Patronage at the Imperial Court The Antique as Innovation, Band 1