Seite - 181 - in Jacopo Strada and Cultural Patronage at the Imperial Court - The Antique as Innovation, Band 1 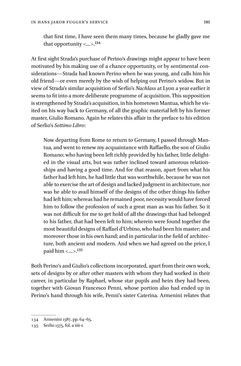 181In Hans Jakob Fugger’s Service that first time, I have seen them many times, because he gladly gave me that opportunity <…>.134 At first sight Strada’s purchase of Perino’s drawings might appear to have been motivated by his making use of a chance opportunity, or by sentimental con- siderations—Strada had known Perino when he was young, and calls him his old friend—or even merely by the wish of helping out Perino’s widow. But in view of Strada’s similar acquisition of Serlio’s Nachlass at Lyon a year earlier it seems to fit into a more deliberate programme of acquisition. This supposition is strengthened by Strada’s acquisition, in his hometown Mantua, which he vis- ited on his way back to Germany, of all the graphic material left by his former master, Giulio Romano. Again he relates this affair in the preface to his edition of Serlio’s Settimo Libro: Now departing from Rome to return to Germany, I passed through Man- tua, and went to renew my acquaintance with Raffaello, the son of Giulio Romano; who having been left richly provided by his father, little delight- ed in the visual arts, but was rather inclined toward amorous relation- ships and having a good time. And for that reason, apart from what his father had left him, he had little that was worthwhile, because he was not able to exercise the art of design and lacked judgment in architecture, nor was he able to avail himself of the designs of the other things his father had left him; whereas had he remained poor, necessity would have forced him to follow the profession of such a great man as was his father. So it was not difficult for me to get hold of all the drawings that had belonged to his father, that had been left to him; wherein were found together the most beautiful designs of Raffael d’Urbino, who had been his master; and moreover those in his own hand; and in particular in the field of architec- ture, both ancient and modern. And when we had agreed on the price, I paid him <…>.135 Both Perino’s and Giulio’s collections incorporated, apart from their own work, sets of designs by or after other masters with whom they had worked in their career, in particular by Raphael, whose star pupils and heirs they had been, together with Giovan Francesco Penni, whose portion also had ended up in Perino’s hand through his wife, Penni’s sister Caterina. Armenini relates that 134 Armenini 1587, pp. 64–65. 135 Serlio 1575, fol. a iiii-r.
zurück zum  Buch Jacopo Strada and Cultural Patronage at the Imperial Court - The Antique as Innovation, Band 1"
Jacopo Strada and Cultural Patronage at the Imperial Court The Antique as Innovation, Band 1