Seite - 207 - in Jacopo Strada and Cultural Patronage at the Imperial Court - The Antique as Innovation, Band 1 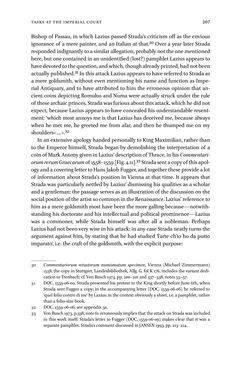 207Tasks at the Imperial Court Bishop of Passau, in which Lazius passed Strada’s criticism off as the envious ignorance of a mere painter, and an Italian at that.30 Over a year later Strada responded indignantly to a similar allegation, probably not the one mentioned here, but one contained in an unidentified (lost?) pamphlet Lazius appears to have devoted to the question, and which, though already printed, had not been actually published.31 In this attack Lazius appears to have referred to Strada as a mere goldsmith, without even mentioning his name and function as Impe- rial Antiquary, and to have attributed to him the erroneous opinion that an- cient coins depicting Romulus and Numa were actually struck under the rule of these archaic princes. Strada was furious about this attack, which he did not expect, because Lazius appears to have concealed his understandable resent- ment: ‘which most annoys me is that Lazius has deceived me, because always when he met me, he greeted me from afar, and then he thumped me on my shoulders<…>.32 In an extensive apology handed personally to King Maximilian, rather than to the Emperor himself, Strada began by demolishing the interpretation of a coin of Mark Antony given in Lazius’ description of Thrace, in his Commentari- orum rerum Graecarum of 1558–1559 [Fig. 4.11].33 Strada sent a copy of this apol- ogy and a covering letter to Hans Jakob Fugger, and together these provide a lot of information about Strada’s position in Vienna at that time. It appears that Strada was particularly nettled by Lazius’ dismissing his qualities as a scholar and a gentleman: the passage serves as an illustration of the discussion on the social position of the artist so common in the Renaissance. Lazius’ reference to him as a mere goldsmith most have been the more galling because—notwith- standing his doctorate and his intellectual and political prominence—Lazius was a commoner, while Strada himself was after all a nobleman. Perhaps Lazius had not been very wise in his attack: in any case Strada neatly turns the argument against him, by stating that he had studied ‘l’arte ch’io ho da putto imparato’, i.e. the craft of the goldsmith, with the explicit purpose: 30 Commentariorum vetustorum numismatum specimen, Vienna (Michael Zimmermann) 1558; the copy in Stuttgart, Landesbibliothek, Allg. G. fol K 176, includes the variant dedi- cation to Trenbach; cf. Von Busch 1973, pp. 200–201 and 337–338, notes 55–57. 31 DOC. 1559-06-00. Strada presented his protest to the King shortly before June 6th, when Strada sent Fugger a copy; in the accompanying letter (DOC. 1559-06-06) he referred to ‘quel folio contro di me’ by Lazius: in the context obviously a sheet, i.e. a pamphlet, rather than a folio-size book. 32 DOC. 1559-06-06; see appendix 3a. 33 Von Busch 1973, p.338, note 61 erroneously implies that the attack on Strada was included in this work itself; Strada’s letter to Fugger (DOC. 1559-06-09) makes clear that it was a separate pamphlet. Strada’s comment discussed in JANSEN 1993, pp. 213–214.
zurück zum  Buch Jacopo Strada and Cultural Patronage at the Imperial Court - The Antique as Innovation, Band 1"
Jacopo Strada and Cultural Patronage at the Imperial Court The Antique as Innovation, Band 1