Seite - 281 - in Jacopo Strada and Cultural Patronage at the Imperial Court - The Antique as Innovation, Band 1 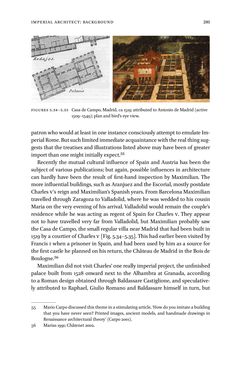 281Imperial Architect: Background 55 Mario Carpo discussed this theme in a stimulating article, ‘How do you imitate a building that you have never seen? Printed images, ancient models, and handmade drawings in Renaissance architectural theory’ (Carpo 2001). 56 Marias 1991; Châtenet 2002. patron who would at least in one instance consciously attempt to emulate Im- perial Rome. But such limited immediate acquaintance with the real thing sug- gests that the treatises and illustrations listed above may have been of greater import than one might initially expect.55 Recently the mutual cultural influence of Spain and Austria has been the subject of various publications; but again, possible influences in architecture can hardly have been the result of first-hand inspection by Maximilian. The more influential buildings, such as Aranjuez and the Escorial, mostly postdate Charles v’s reign and Maximilian’s Spanish years. From Barcelona Maximilian travelled through Zaragoza to Valladolid, where he was wedded to his cousin Maria on the very evening of his arrival. Valladolid would remain the couple’s residence while he was acting as regent of Spain for Charles v. They appear not to have travelled very far from Valladolid, but Maximilian probably saw the Casa de Campo, the small regular villa near Madrid that had been built in 1519 by a courtier of Charles v [Fig. 5.34–5.35]. This had earlier been visited by Francis i when a prisoner in Spain, and had been used by him as a source for the first castle he planned on his return, the Château de Madrid in the Bois de Boulogne.56 Maximilian did not visit Charles’ one really imperial project, the unfinished palace built from 1528 onward next to the Alhambra at Granada, according to a Roman design obtained through Baldassare Castiglione, and speculative- ly attributed to Raphael, Giulio Romano and Baldassare himself in turn, but Figures 5.34–5.35 Casa de Campo, Madrid, ca 1519; attributed to Antonio de Madrid (active 1509–1549); plan and bird’s eye view.
zurück zum  Buch Jacopo Strada and Cultural Patronage at the Imperial Court - The Antique as Innovation, Band 1"
Jacopo Strada and Cultural Patronage at the Imperial Court The Antique as Innovation, Band 1