Seite - 323 - in Jacopo Strada and Cultural Patronage at the Imperial Court - The Antique as Innovation, Band 1 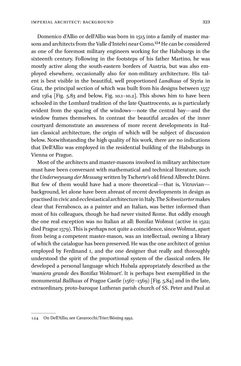 323Imperial Architect: Background 124 On Dell’Allio, see Cavarocchi/Trier/Böning 1992. Domenico d’Allio or dell’Allio was born in 1515 into a family of master ma- sons and architects from the Valle d’Intelvi near Como.124 He can be considered as one of the foremost military engineers working for the Habsburgs in the sixteenth century. Following in the footsteps of his father Martino, he was mostly active along the south-eastern borders of Austria, but was also em- ployed elsewhere, occasionally also for non-military architecture. His tal- ent is best visible in the beautiful, well proportioned Landhaus of Styria in Graz, the principal section of which was built from his designs between 1557 and 1564 [Fig. 5.83 and below, Fig. 10.1–10.2]. This shows him to have been schooled in the Lombard tradition of the late Quattrocento, as is particularly evident from the spacing of the windows—note the central bay—and the window frames themselves. In contrast the beautiful arcades of the inner courtyard demonstrate an awareness of more recent developments in Ital- ian classical architecture, the origin of which will be subject of discussion below. Notwithstanding the high quality of his work, there are no indications that Dell’Allio was employed in the residential building of the Habsburgs in Vienna or Prague. Most of the architects and master-masons involved in military architecture must have been conversant with mathematical and technical literature, such the Underweysung der Messung written by Tscherte’s old friend Albrecht Dürer. But few of them would have had a more theoretical—that is, Vitruvian— background, let alone have been abreast of recent developments in design as practised in civic and ecclesiastical architecture in Italy. The Schweizertor makes clear that Ferrabosco, as a painter and an Italian, was better informed than most of his colleagues, though he had never visited Rome. But oddly enough the one real exception was no Italian at all: Bonifaz Wolmut (active in 1522; died Prague 1579). This is perhaps not quite a coincidence, since Wolmut, apart from being a competent master-mason, was an intellectual, owning a library of which the catalogue has been preserved. He was the one architect of genius employed by Ferdinand i, and the one designer that really and thoroughly understood the spirit of the proportional system of the classical orders. He developed a personal language which Hubala appropriately described as the ‘maniera grande des Bonifaz Wolmuet’. It is perhaps best exemplified in the monumental Ballhaus of Prague Castle (1567–1569) [Fig. 5.84] and in the late, extraordinary, proto-baroque Lutheran parish church of SS. Peter and Paul at
zurück zum  Buch Jacopo Strada and Cultural Patronage at the Imperial Court - The Antique as Innovation, Band 1"
Jacopo Strada and Cultural Patronage at the Imperial Court The Antique as Innovation, Band 1