Seite - 345 - in Jacopo Strada and Cultural Patronage at the Imperial Court - The Antique as Innovation, Band 1 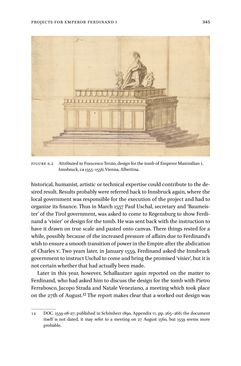 345Projects for Emperor Ferdinand i historical, humanist, artistic or technical expertise could contribute to the de- sired result. Results probably were referred back to Innsbruck again, where the local government was responsible for the execution of the project and had to organize its finance. Thus in March 1557 Paul Uschal, secretary and ‘Baumeis- ter’ of the Tirol government, was asked to come to Regensburg to show Ferdi- nand a ‘visier’ or design for the tomb. He was sent back with the instruction to have it drawn on true scale and pasted onto canvas. There things rested for a while, possibly because of the increased pressure of affairs due to Ferdinand’s wish to ensure a smooth transition of power in the Empire after the abdication of Charles v. Two years later, in January 1559, Ferdinand asked the Innsbruck government to instruct Uschal to come and bring the promised ‘visier’, but it is not certain whether that had actually been made. Later in this year, however, Schallautzer again reported on the matter to Ferdinand, who had asked him to discuss the design for the tomb with Pietro Ferrabosco, Jacopo Strada and Natale Veneziano, a meeting which took place on the 27th of August.12 The report makes clear that a worked out design was 12 DOC. 1559-08-27; published in Schönherr 1890, Appendix ii, pp. 265–266; the document itself is not dated, it may refer to a meeting on 27 August 1560, but 1559 seems more probable. Figure 6.� Attributed to Francesco Terzio, design for the tomb of Emperor Maximilian i, Innsbruck, ca 1555–1556; Vienna, Albertina.
zurück zum  Buch Jacopo Strada and Cultural Patronage at the Imperial Court - The Antique as Innovation, Band 1"
Jacopo Strada and Cultural Patronage at the Imperial Court The Antique as Innovation, Band 1