Seite - 371 - in Jacopo Strada and Cultural Patronage at the Imperial Court - The Antique as Innovation, Band 1 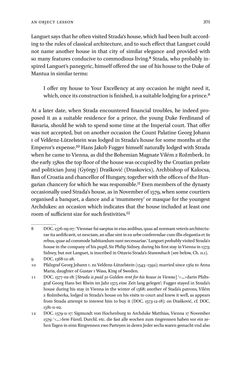 371An Object Lesson Languet says that he often visited Strada’s house, which had been built accord- ing to the rules of classical architecture, and to such effect that Languet could not name another house in that city of similar elegance and provided with so many features conducive to commodious living.8 Strada, who probably in- spired Languet’s panegyric, himself offered the use of his house to the Duke of Mantua in similar terms: I offer my house to Your Excellency at any occasion he might need it, which, once its construction is finished, is a suitable lodging for a prince.9 At a later date, when Strada encountered financial troubles, he indeed pro- posed it as a suitable residence for a prince, the young Duke Ferdinand of Bavaria, should he wish to spend some time at the Imperial court. That offer was not accepted, but on another occasion the Count Palatine Georg Johann i of Veldenz-Lützelstein was lodged in Strada’s house for some months at the Emperor’s expense.10 Hans Jakob Fugger himself naturally lodged with Strada when he came to Vienna, as did the Bohemian Magnate Vilém z Rožmberk. In the early 1580s the top floor of the house was occupied by the Croatian prelate and politician Juraj (György) Drašković (Draskovics), Archbishop of Kalocsa, Ban of Croatia and chancellor of Hungary, together with the offices of the Hun- garian chancery for which he was responsible.11 Even members of the dynasty occasionally used Strada’s house, as in November of 1579, when some courtiers organised a banquet, a dance and a ‘mummerey’ or masque for the youngest Archdukes: an occasion which indicates that the house included at least one room of sufficient size for such festivities.12 8 DOC. 1576-09-07: ‘Viennae fui saepius in eius aedibus, quas ad normam veteris architectu- rae ita aedificavit, ut nesciam, an ullae sint in ea urbe conferendae cum illis elegantia et iis rebus, quae ad commode habitandum sunt necessariae.’ Languet probably visited Strada’s house in the company of his pupil, Sir Philip Sidney, during his first stay in Vienna in 1573; Sidney, but not Languet, is inscribed in Ottavio Strada’s Stammbuch (see below, Ch. 11.1). 9 DOC. 1568-12-28. 10 Pfalzgraf Georg Johann i. zu Veldenz-Lützelstein (1543–1592); married since 1562 to Anna Maria, daughter of Gustav i Wasa, King of Sweden. 11 DOC. 1577-02-18: [Strada is paid 50 Gulden rent for his house in Vienna] ‘<...>darin Pfalts- graf Georg Hans bei Rhein im Jahr 1575 eine Zeit lang gelegen’; Fugger stayed in Strada’s house during his stay in Vienna in the winter of 1568; another of Stada’s patrons, Vilém z Rožmberka, lodged in Strada’s house on his visits to court and knew it well, as appears from Strada attempt to interest him to buy it (DOC. 1573-12-18); on Drašković, cf. DOC. 1581-11-02. 12 DOC. 1579-11-17: Sigmundt von Hochenburg to Archduke Matthias, Vienna 17 November 1579: ‘<...>Iere Fürstl. Durchl. etc. die fast alle wochen zum ringrennen haben vor ein ze- hen Tagen in einn Ringrennen zwo Parteyen in deren Jeder sechs waren gemacht vnd also
zurück zum  Buch Jacopo Strada and Cultural Patronage at the Imperial Court - The Antique as Innovation, Band 1"
Jacopo Strada and Cultural Patronage at the Imperial Court The Antique as Innovation, Band 1