Seite - 863 - in Jacopo Strada and Cultural Patronage at the Imperial Court - The Antique as Innovation, Band 2 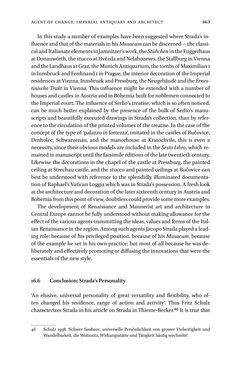 863Agent of Change: Imperial Antiquary and Architect In this study a number of examples have been suggested where Strada’s in- fluence and that of the materials in his Musaeum can be discerned—the classi- cal and Italianate elements in Jamnitzer’s work, the Stübchen in the Fuggerhaus at Donauwörth, the stucco at Hvězda and Nelahozeves, the Stallburg in Vienna and the Landhaus at Graz, the Munich Antiquarium, the tombs of Maximilian i in Innsbruck and Ferdinand i in Prague, the interior decoration of the Imperial residences at Vienna, Innsbruck and Pressburg, the Neugebäude and the Ernes- tinische Trakt in Vienna. This influence might be extended with a number of houses and castles in Austria and in Bohemia built for noblemen connected to the Imperial court. The influence of Serlio’s treatise, which is so often noticed, can be much better explained by the presence of the bulk of Serlio’s manu- scripts and beautifully executed drawings in Strada’s collection, than by refer- ence to the circulation of the printed volumes of the treatise. In the case of the concept of the type of ‘palazzo in fortezza’, imitated in the castles of Bučovice, Drnholec, Schwarzenau, and the manorhouse at Kratochvile, this is even a necessity, since their obvious models are included in the Sesto Libro, which re- mained in manuscript until the facsimile editions of the late twentieth century. Likewise the decorations in the chapel of the castle at Pressburg, the painted ceiling at Strechau castle, and the stucco and painted ceilings at Bučovice can best be understood with reference to the splendidly illuminated documenta- tion of Raphael’s Vatican Loggia which was in Strada’s possession. A fresh look at the architecture and decoration of the later sixteenth century in Austria and Bohemia from this point of view, doubtless could provide some more examples. The development of Renaissance and Mannerist art and architecture in Central Europe cannot be fully understood without making allowance for the effect of the various agents transmitting the ideas, values and forms of the Ital- ian Renaissance in the region. Among such agents Jacopo Strada played a lead- ing role: because of his privileged position, because of his Musaeum, because of the example he set in his own practice; but most of all because he was de- liberately and effectively promoting or diffusing the innovations that were the essentials of the new style. 16.6 Conclusion: Strada’s Personality ‘An elusive, universal personality of great versatility and flexibility, who of- ten changed his residence, range of action and activity’. Thus Fritz Schulz characterizes Strada in his article on Strada in Thieme-Becker.46 It is true that 46 Schulz 1938: ‘Schwer fassbare, universelle Persönlichkeit von grosser Vielseitigkeit und Wandelbarkeit, die Wohnsitz, Wirkungsstätte und Tätigkeit häufig wechselte’.
zurück zum  Buch Jacopo Strada and Cultural Patronage at the Imperial Court - The Antique as Innovation, Band 2"
Jacopo Strada and Cultural Patronage at the Imperial Court The Antique as Innovation, Band 2