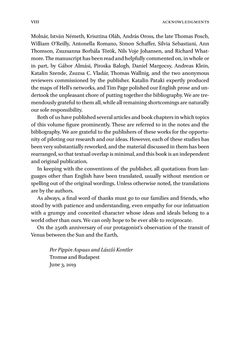 viii Acknowledgments Molnár, István Németh, Krisztina Oláh, András Oross, the late Thomas Posch, William O’Reilly, Antonella Romano, Simon Schaffer, Silvia Sebastiani, Ann Thomson, Zsuzsanna Borbála Török, Nils Voje Johansen, and Richard What- more. The manuscript has been read and helpfully commented on, in whole or in part, by Gábor Almási, Piroska Balogh, Daniel Margocsy, Andreas Klein, Katalin Szende, Zsuzsa C. Vladár, Thomas Wallnig, and the two anonymous reviewers commissioned by the publisher. Katalin Pataki expertly produced the maps of Hell’s networks, and Tim Page polished our English prose and un- dertook the unpleasant chore of putting together the bibliography. We are tre- mendously grateful to them all, while all remaining shortcomings are naturally our sole responsibility. Both of us have published several articles and book chapters in which topics of this volume figure prominently. These are referred to in the notes and the bibliography. We are grateful to the publishers of these works for the opportu- nity of piloting our research and our ideas. However, each of these studies has been very substantially reworked, and the material discussed in them has been rearranged, so that textual overlap is minimal, and this book is an independent and original publication. In keeping with the conventions of the publisher, all quotations from lan- guages other than English have been translated, usually without mention or spelling out of the original wordings. Unless otherwise noted, the translations are by the authors. As always, a final word of thanks must go to our families and friends, who stood by with patience and understanding, even empathy for our infatuation with a grumpy and conceited character whose ideas and ideals belong to a world other than ours. We can only hope to be ever able to reciprocate. On the 250th anniversary of our protagonist’s observation of the transit of Venus between the Sun and the Earth, Per Pippin Aspaas and László Kontler Tromsø and Budapest June 3, 2019
zurück zum  Buch Maximilian Hell (1720–92) - And the Ends of Jesuit Science in Enlightenment Europe"
Maximilian Hell (1720–92) And the Ends of Jesuit Science in Enlightenment Europe