An Episode with Telex#

"The telex network is a switched network of teleprinters similar to a telephone network, for the purposes of sending text-based messages. The term refers to the network, not the teleprinters; point-to-point teleprinter systems had been in use long before telex exchanges were formed starting in the 1930s. Teleprinters evolved from telegraph systems, and, like the telegraph, they used the presence or absence of a pre-defined level of current to represent the mark or space symbols. This is as opposed to the analog telephone system, which used differing voltages to encode frequency information. For this reason, telex exchanges were entirely separate from the telephone system, with their own signalling standards, exchanges and system of "telex numbers" (the counterpart of a telephone number)." (This is cited from Wikipedia under Creative Commons].

When E-Mail, Internet and WWW arrived, Telex became superfluous and today exists only in small niches, and if so incorporated into some other network.

An anecdote, hopefully good for a smile# 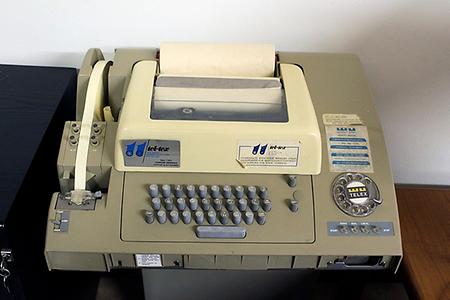 I am owner of a small company. I started to use Telex around 1980. For many years it proved to be a valuable and inexpensive tool to communicate with customers and other partners.

It is funny how my first attempt with Telex went wrong. I informed some major custormers and a local newspaper about a new innovation in our company with a text like "Peter SCHNURR company (please use big capital letters) reports about a major innovation in his company: ...."

I did not know at this time that Telex did not use capital letters. Hence the message transmitted was "peter schnurr company (please use big capital letters) reports about a major innovation in his company: ...."

The local newspaper was rather amused about my message and printed it exactly as received under the heading "Small company wants to be big".

Well, I was not excactly pleased by this, but it certainly did not hurt either the company nor the innovation. Rather, I have the impression that the smile caused by the message and its title assured that many remembered the innovation better than they otherwise might have!

PS: I have asked my 11 year old son what he knows about Telex. He had never heared of this kind of equipment.

My wife worked at SITA (a communication system used by many airlines). Can you imagine that message routing was then implemented by receiving a ticker tape (Lochstreifen) at one telex machine and feeding it into another? The reason was that there were dedicated lines from the SITA Offices to airports.