Seite - 185 - in Jacopo Strada and Cultural Patronage at the Imperial Court - The Antique as Innovation, Band 1 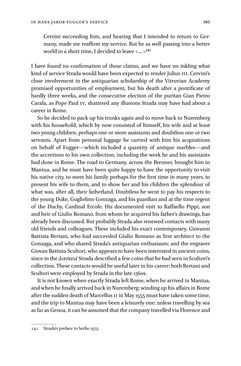 185In Hans Jakob Fugger’s Service Cervini succeeding him, and hearing that I intended to return to Ger- many, made me reaffirm my service. But he as well passing into a better world in a short time, I decided to leave <…>141 I have found no confirmation of these claims, and we have no inkling what kind of service Strada would have been expected to render Julius iii. Cervini’s close involvement in the antiquarian scholarship of the Vitruvian Academy promised opportunities of employment, but his death after a pontificate of hardly three weeks, and the consecutive election of the puritan Gian Pietro Carafa, as Pope Paul iv, shattered any illusions Strada may have had about a career in Rome. So he decided to pack up his trunks again and to move back to Nuremberg with his household, which by now consisted of himself, his wife and at least two young children, perhaps one or more assistants and doubtless one or two servants. Apart from personal luggage he carried with him his acquisitions on behalf of Fugger—which included a quantity of antique marbles—and the accretions to his own collection, including the work he and his assistants had done in Rome. The road to Germany, across the Brenner, brought him to Mantua, and he must have been quite happy to have the opportunity to visit his native city, to meet his family perhaps for the first time in many years, to present his wife to them, and to show her and his children the splendour of what was, after all, their fatherland. Doubtless he went to pay his respects to the young Duke, Guglielmo Gonzaga, and his guardian and at the time regent of the Duchy, Cardinal Ercole. His documented visit to Raffaello Pippi, son and heir of Giulio Romano, from whom he acquired his father’s drawings, has already been discussed. But probably Strada also renewed contacts with many old friends and colleagues. These included his exact contemporary, Giovanni Battista Bertani, who had succeeded Giulio Romano as first architect to the Gonzaga, and who shared Strada’s antiquarian enthusiasm; and the engraver Giovan Battista Scultori, who appears to have been interested in ancient coins, since in the Διασκευέ Strada described a few coins that he had seen in Scultori’s collection. These contacts would be useful later in his career: both Bertani and Scultori were employed by Strada in the late 1560s. It is not known when exactly Strada left Rome, when he arrived in Mantua, and when he finally arrived back in Nuremberg: winding up his affairs in Rome after the sudden death of Marcellus ii in May 1555 must have taken some time, and the trip to Mantua may have been a leisurely one: unless travelling by sea as far as Genoa, it can be assumed that the company travelled via Florence and 141 Strada’s preface to Serlio 1575.
zurück zum  Buch Jacopo Strada and Cultural Patronage at the Imperial Court - The Antique as Innovation, Band 1"
Jacopo Strada and Cultural Patronage at the Imperial Court The Antique as Innovation, Band 1