Seite - 579 - in Jacopo Strada and Cultural Patronage at the Imperial Court - The Antique as Innovation, Band 2 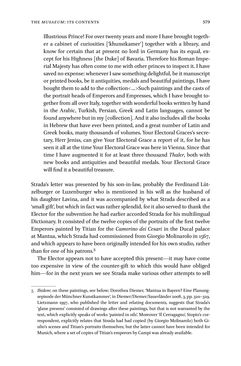 579The Musaeum: Its Contents Illustrious Prince! For over twenty years and more I have brought togeth- er a cabinet of curiosities [‘khunstkamer’] together with a library, and know for certain that at present no lord in Germany has its equal, ex- cept for his Highness [the Duke] of Bavaria. Therefore his Roman Impe- rial Majesty has often come to me with other princes to inspect it. I have saved no expense: whenever I saw something delightful, be it manuscript or printed books, be it antiquities, medals and beautiful paintings, I have bought them to add to the collection<…>Such paintings and the casts of the portrait heads of Emperors and Empresses, which I have brought to- gether from all over Italy, together with wonderful books written by hand in the Arabic, Turkish, Persian, Greek and Latin languages, cannot be found anywhere but in my [collection]. And it also includes all the books in Hebrew that have ever been printed, and a great number of Latin and Greek books, many thousands of volumes. Your Electoral Graces’s secre- tary, Herr Jeniss, can give Your Electoral Grace a report of it, for he has seen it all at the time Your Electoral Grace was here in Vienna. Since that time I have augmented it for at least three thousand Thaler, both with new books and antiquities and beautiful medals. Your Electoral Grace will find it a beautiful treasure. Strada’s letter was presented by his son-in-law, probably the Ferdinand Lüt- zelburger or Luzenburger who is mentioned in his will as the husband of his daughter Lavina, and it was accompanied by what Strada described as a ‘small gift’, but which in fact was rather splendid, for it also served to thank the Elector for the subvention he had earlier accorded Strada for his multilingual Dictionary. It consisted of the twelve copies of the portraits of the first twelve Emperors painted by Titian for the Camerino dei Cesari in the Ducal palace at Mantua, which Strada had commissioned from Giorgio Molinarolo in 1567, and which appears to have been originally intended for his own studio, rather than for one of his patrons.5 The Elector appears not to have accepted this present—it may have come too expensive in view of the counter-gift to which this would have obliged him—for in the next years we see Strada make various other attempts to sell 5 Ibidem; on these paintings, see below; Dorothea Diemer, ‘Mantua in Bayern? Eine Planung- sepisode der Münchner Kunstkammer’, in Diemer/Diemer/Sauerländer 2008, 3, pp. 320–329. Lietzmann 1997, who published the letter and relating documents, suggests that Strada’s ‘glane presenz’ consisted of drawings after these paintings, but that is not warranted by the text, which explicitly speaks of works ‘painted in oils’. Moreover ‘Il Cerragagno’, Stopio’s cor- respondent, explicitly relates that Strada had had copied (by Giorgio Molinarolo) both Gi- ulio’s scenes and Titian’s portraits themselves; but the latter cannot have been intended for Munich, where a set of copies of Titian’s emperors by Campi was already available.
zurück zum  Buch Jacopo Strada and Cultural Patronage at the Imperial Court - The Antique as Innovation, Band 2"
Jacopo Strada and Cultural Patronage at the Imperial Court The Antique as Innovation, Band 2