Seite - 605 - in Jacopo Strada and Cultural Patronage at the Imperial Court - The Antique as Innovation, Band 2 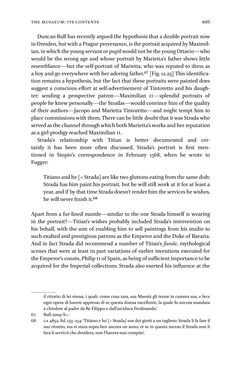 605The Musaeum: Its Contents Duncan Bull has recently argued the hypothesis that a double portrait now in Dresden, but with a Prague provenance, is the portrait acquired by Maximil- ian, in which the young servant or pupil would not be the young Ottavio—who would be the wrong age and whose portrait by Marietta’s father shows little resemblance—but the self-portrait of Marietta, who was reputed to dress as a boy and go everywhere with her adoring father.67 [Fig. 12.23] This identifica- tion remains a hypothesis, but the fact that these portraits were painted does suggest a conscious effort at self-advertisement of Tintoretto and his daugh- ter: sending a prospective patron—Maximilian ii—splendid portraits of people he knew personally—the Stradas—would convince him of the quality of their authors—Jacopo and Marietta Tintoretto—and might tempt him to place commissions with them. There can be little doubt that it was Strada who served as the channel through which both Marietta’s works and her reputation as a girl-prodigy reached Maximilian ii. Strada’s relationship with Titian is better documented and cer- tainly it has been more often discussed. Strada’s portrait is first men- tioned in Stopio’s correspondence in February 1568, when he wrote to Fugger: Titiano and he [= Strada] are like two gluttons eating from the same dish: Strada has him paint his portrait, but he will still work at it for at least a year, and if by that time Strada doesn’t render him the services he wishes, he will never finish it.68 Apart from a fur-lined mantle—similar to the one Strada himself is wearing in the portrait?—Titian’s wishes probably included Strada’s intervention on his behalf, with the aim of enabling him to sell paintings from his studio to such exalted and prestigious patrons as the Emperor and the Duke of Bavaria. And in fact Strada did recommend a number of Titian’s favole, mythological scenes that were at least in part variations of earlier inventions executed for the Emperor’s cousin, Philip ii of Spain, as being of sufficient importance to be acquired for the Imperial collections. Strada also exerted his influence at the il ritratto di lei stessa, i quali, come cosa rara, sua Maestà gli tenne in camera sua, e fece ogni opera di havere appresso di se questa donna excellente, la quale fu ancora mandata à chiedere al padre da Re Filippo e dall’arciduca Ferdinando’. 67 Bull 2009<b>. 68 la 4852, fol. 153–154: ‘Titiano e lui [= Strada] son doi giotti a un tagliero: Strada li fa fare il suo ritratto, ma vi stara sopra ben ancora un anno, et se in questo mezzo il Strada non li fara li servicii che desidera, non l’havera mai compito’.
zurück zum  Buch Jacopo Strada and Cultural Patronage at the Imperial Court - The Antique as Innovation, Band 2"
Jacopo Strada and Cultural Patronage at the Imperial Court The Antique as Innovation, Band 2